Diaghilev's Empire: How the Ballets Russes Enthralled the World (Hardcover) 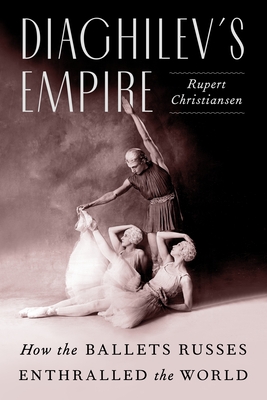 Rupert Christiansen, a renowned dance critic and arts correspondent, presents a sweeping history of the Ballets Russes and of Serge Diaghilev’s dream of bringing Russian art and culture to the West.

Serge Diaghilev, the Russian impresario and founder of the Ballets Russes, is often said to have invented modern ballet. An art critic and connoisseur, Diaghilev had no training in dance or choreography, but he had a dream of bringing Russian art, music, design, and expression to the West and a mission to drive a cultural and artistic revolution.

Bringing together such legendary talents as Vaslav Nijinsky, Anna Pavlova, Igor Stravinsky, Pablo Picasso, and Henri Matisse, this complex and visionary genius created a new form of ballet defined by artistic integrity, creative freedom, and an all-encompassing experience of art, movement, and music. The explosive color combinations, sensual and androgynous choreography, and experimental sounds of the Ballets Russes were called “barbaric” by the Parisian press, but its radical style usurped the entrenched mores of traditional ballet and transformed the European cultural sphere at large.

Diaghilev’s Empire, the publication of which marks the one hundred fiftieth anniversary of Diaghilev’s birth, is a daring, impeccably researched reassessment of the phenomenon of the Ballets Russes and the Russian Revolution in twentieth-century art and culture. Rupert Christiansen, a leading dance critic, explores the fiery conflicts, outsize personalities, and extraordinary artistic innovations that make up this enduring story of triumph and disaster.

Rupert Christiansen is the dance critic for The Spectator. He was also the dance critic for The Mail on Sunday from 1995 to 2020 and has written on dance-focused subjects for many publications in the United Kingdom and the United States, including Vogue, Vanity Fair, Harper’s & Queen, The Observer, The Daily Telegraph, The Literary Review, Dance Now, and Dance Theatre Journal. He was the opera critic and arts correspondent for The Daily Telegraph from 1996 to 2020 and is the author of a dozen nonfiction books, including Romantic Affinities and City of Light. He was elected a Fellow of the Royal Society of Literature in 1997 and lives in London.

“Amusing and assertive . . . It distills Diaghilev’s life down to its concentrated, aromatic, essence . . . [Rupert Christiansen] seems to have undergone the task for the sheer love of it, and his delight is infectious.”
—Alexandra Jacobs, The New York Times Book Review

“In the early twentieth century, Sergei Diaghilev’s Ballets Russes revitalized ballet, and the company remained at the forefront of the international avant-garde for decades. In this rich account, Christiansen . . . makes a convincing case for its indelible influence.”
—The New Yorker

“Immensely readable and exhaustively researched . . . Delightful . . . [Christiansen] writes about his subject with such descriptive flair and affectionate animation that its very essence leaps off the page.”
—Debra Craine, The Times

“The story of Diaghilev and the Ballets Russes has been told many times before, but no one is able to master it more engagingly than Rupert Christiansen . . . Deft, elegant.”
—Kathryn Hughes, The Guardian

“A deliciously entertaining account of high art, low cunning and one of the most creative episodes in the history of the arts.”
—Louise Levene, Financial Times

“A riveting account of a visionary . . . Written with sympathy and wit, the book is judiciously researched; but, more crucially, it draws on a lifetime of balletomania, giving readers the benefit of exceptional range. It is also a delicious read into the bargain.”
—Bryan Karetnyk, The Spectator

“Bursting with extraordinary characters and anecdotes . . . As glitteringly modern as its subject deserves . . . [Christiansen's] skill is to take his readers back to Paris in 1905 and make them feel not merely that they are witnessing the birth of a new art form, but one that it was imperative to be part of.”
—Anne Sebba, The Telegraph

“Wonderfully graceful . . . Star-studded with melodrama and intense emotion . . . [Diaghilev’s Empire] elegantly leaps through these highs and lows . . . Christiansen’s innovative new book rightly puts Diaghilev on a par with the other impresarios of modernism, and makes a convincing case for this period of ballet to be considered as radical, and as important, as the better-known worlds of art, literature and music.”
—Francesca Peacock, Mail on Sunday

“Rupert Christiansen brings his usual elegant prose, gift for insight and ability to find intriguing detail to a superb study of the impresario, one that involves scandal and sensation as well as artistic excellence.”
—Martin Chilton, The Independent

“In [this] gripping account of Diaghilev’s life and art, Christiansen has given something that will last.”
—Vivien Schweitzer, The American Scholar

“Sublime art leaps from great showmanship in this vibrant chronicle of early 20th-century ballet . . . A stimulating recreation of a cultural watershed.”
—Publishers Weekly

“Christiansen’s vivid chronicle [is] an essential selection for any performing arts collection and a captivating read for balletomanes.”
—Carolyn Mulac, Booklist

“For the curious reader . . . A fascinating cautionary tale for readers with an interest in ballet history and those who enjoy books about visionaries who weather great failures and great successes.”
—Library Journal

“Well-researched [and] full of entertaining stories . . . A comprehensive look at the influence of one of ballet’s most famous companies.”
—Kirkus Reviews

“Christiansen condenses dramatic history and backstage farce into this dance bio-history for those who can’t get enough of dance history.”
—Lewis J. Whittington, The Philadelphia Dance Journal

“Rupert Christiansen has produced a spectacular read, one fully (and finally!) deserving of its subject—giddy, kaleidoscopic, rich with quirky detail and strange delight. The pages turn themselves.”
—Simon Morrison, author of Bolshoi Confidential