The Book of Stolen Time: Second Book in the Feylawn Chronicles (Hardcover) 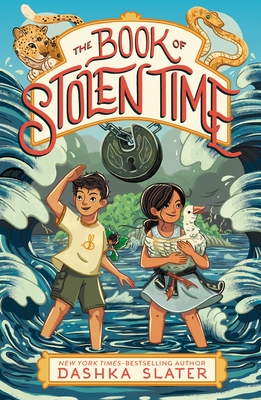 This is book number 2 in the The Feylawn Chronicles series.

From New York Times–bestselling author Dashka Slater comes the whimsical and witty sequel to The Book of Fatal Errors!

Rufus may have successfully sent the feylings home to the Green World, but he still has one pesky feyling under his wing: Nettle, his sometimes enemy, now mentor. Nettle is in charge of helping Rufus and his cousin Abigail protect Feylawn, their grandfather’s magical and mysterious homestead.

But this difficult task becomes even more dangerous when a leopard appears in the woods without warning; strange, waterlogged women arrive to warn of impending doom; and a goblin begins digging his way back to Earth, hungry for revenge. Meanwhile, Rufus’s father is intent on selling Feylawn to the highest bidder. Can Rufus and Abigail save Feylawn and its magic? Or will they have to say goodbye to the feylings forever?

In The Book of Stolen Time, our favorite heroes are back! And magic, mischief, and adventure abound.

Dashka Slater is the New York Times-bestselling author of The 57 Bus, which won the Stonewall Book Award and was a YALSA nonfiction finalist. Her fiction includes The Book of Fatal Errors which was an Amazon Best book of the Month, the picture book Escargot, which won the Wanda Gag Book Award; Baby Shoes; The Antlered Ship, which was a Junior Library Guild Selection and received four starred reviews; and Dangerously Ever After. She is also an award-winning journalist whose articles have appeared in Newsweek, Salon, The New York Times Magazine, and Mother Jones. She lives in California.

"Full of magical creatures, action, and adventure, this is an entertaining duology closer. With the unexpected return of familiar characters, betrayals, and a few twists, the story will keep readers on their toes. Rufus and Abigail learn real-world lessons, such as what it means to sacrifice, persevere, and be true to themselves... An exciting, engaging read." —Kirkus Reviews

"Slater brings adventure, hard lessons, and magic to this sequel, crafting a duology that pulls the fantastical into the real world... A great middle grade title for burgeoning fantasy lovers." —School Library Journal