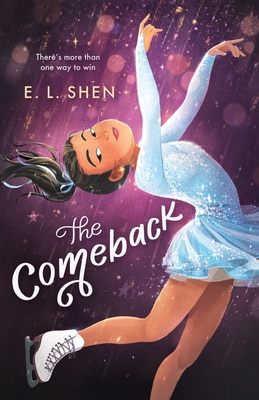 E. L. Shen's The Comeback is a heartfelt middle-grade debut about a young Chinese American girl trying to be a champ—in figure skating and in life.

Twelve-year-old Maxine Chen is just trying to nail that perfect landing: on the ice, in middle school, and at home, where her parents worry that competitive skating is too much pressure for a budding tween. Maxine isn’t concerned, however—she’s determined to glide to victory. But then a bully at school starts teasing Maxine for her Chinese heritage, leaving her stunned and speechless. And at the rink, she finds herself up against a stellar new skater named Hollie, whose grace and skill threaten to edge Maxine out of the competition. With everything she knows on uneven ice, will Maxine crash under the pressure? Or can she power her way to a comeback?

Set in Lake Placid, New York, this is a spunky yet stirring middle-grade story that examines racism, female rivalry and friendship, and the enduring and universal necessity of love and support.

E. L. Shen is a writer, editor, and former figure skater. Her childhood skating career was not nearly as prolific as Maxine's, but her personality is just as fiery. She received her Bachelor of Arts from Barnard College of Columbia University, where she majored in English with a concentration in creative writing. Originally from upstate New York, she currently resides in Manhattan.

"With fast-paced prose and an ear for authentic dialogue, Shen brings big emotions and ideas to the hyper-focused world of the obsessive skater. Her sharp depiction of an eager and courageous Maxine makes the lessons about the ebb and flow of friendship less clichéd than they might have been . . . Shen has created a high-spirited character worth cheering for." —The New York Times

"Shen has created a wonderfully grounded character who navigates both middle school and the world of elite athletic competition with an authentic voice—foibles, insecurities, and all. And deftly woven around edge-of-your seat competition scenes are more mundane but significant issues: everyday racism, sportsmanship, burnout among young athletes, the value of true friendships, and the unfaltering love and support of family. . .That Maxine’s figure-skating idols are all Asian (and that there are so many of them) reminds readers of how important representation is." —Kirkus Reviews, starred review

"Through Maxine’s point of view, readers will become enveloped in the world of skating, cheering her on in competition, in life, and in opposition to the infuriating Alex. They will also find Maxine’s predicaments very familiar, as Maxine decides to keep the bullying to herself instead of confiding in her parents. Shen does an excellent job of depicting what racist bullying is like, how it can escalate, and the way it begins to take over every part of a victim's life. Fast-paced chapters filled with competition, friendship, and inspiration make this a worthy addition to any middle-grade collection." —Booklist, starred review

"Set in the dazzling world of competitive figure skating, this is a heartwarming story of perseverance and self-acceptance.” —The Horn Book

"Deftly weaving ice skating, middle school angst, and racism, The Comeback will have you rooting for Maxine from beginning to end. This one is a total winner." —Barbara O’Connor, New York Times-bestselling author of Wish

"I soared through the prose and the story, loving every minute of Maxine’s journey as a competitive ice skater." —Ellen Oh, author of the Spirit Hunters series and The Dragon Egg Princess

"I cheered for the spirited and determined Maxine both on and off the ice in this fast-paced story that made me laugh out loud and cry tears of joy and heartbreak. A story deserving of a gold medal!" —Debbi Michiko Florence, author of the Jasmine Toguchi series and Keep It Together, Keiko Carter

"E. L. Shen has written a refreshingly spunky and brave story about what it means to fight for your dreams even when the world is set on making you feel like an outsider. Maxine is a character you will find yourself rooting for on and off the ice, as she glides into her own power and purpose. A delightful debut that offers young people—especially young girls—a strong model of what it looks like to take risks and dare to be great." —Mariama J. Lockington, author of For Black Girls Like Me