The Hunger Between Us (Hardcover) 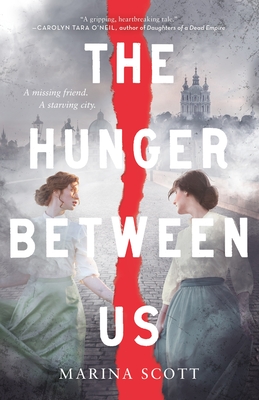 For fans of Elizabeth Wein and Ruta Sepetys, an absorbing, fast-paced YA debut novel from Marina Scott about a girl’s determination to survive during the Nazi siege of Leningrad—and to save her best friend from a horrible fate.

There are some lines that should never be crossed—even in a city ruled by hunger. The black market is Liza’s lifeline, where she barters family heirlooms and steals whatever she can get her hands on just for enough food to survive. Morality, after all, has become a fluid thing since the Nazi siege has cut off her city from the rest of the world. Hope for a quick liberation is obliterated as the Soviet government focuses on sustaining the Red Army and not the city, subjecting its people to unimaginable cruelties at the hands of the secret police. When Liza’s best friend Aka proposes that they go to the same bullying officials, rumored to give young women food in exchange for “entertainment,” Liza thinks there surely must be some other way. Then Aka disappears and Liza resolves to rescue her no matter the cost, entangling herself in an increasingly dangerous web with two former classmates, one a policeman, the other forced to live underground.

The Hunger Between Us is an absorbing novel about being trapped with impossible choices and the bonds of love that are tested along dangerous paths.

Marina Scott was born and raised behind the Iron Curtain in Vilnius, Lithuania. She graduated from a local university with a Master’s degree in library science, but a short stint in a Soviet library changed her mind about being a librarian in the U.S.S.R. She immigrated to the United States in 2000 and now resides in Salt Lake City. Her books include The Hunger Between Us, Neighbors, and Yearning.

“Scott’s high-stakes debut . . . combines rich historical details, propulsive pacing, and a bleak, realistically wrought landscape to illuminate this dark chapter in history while raising moral questions about the lengths to which people will go to stay alive.” —Publishers Weekly

“Scott’s work is a page turner and won’t fail to surprise along the way . . . A great addition to a historical fiction collection and will appeal to readers of Orphan Monster Spy by Matt Killeen.” —School Library Journal

“Scott’s intriguing debut brings to life a horrific time in Russia’s history, colored by the gruesome, dark details of the atrocities of war. Throughout, a prevalent theme is reiterated to readers: What happens to morality and humanity when civilization breaks down? A provoking read.” —Booklist

“With a body already ravaged by starvation, Liza becomes an unreliable narrator as she tries to cut through the fog of hunger and fatigue. Much of this suspenseful story is mired in the daily brutality of the siege as Liza tries to find her own moral compass and cling to hope where she can.” —The Horn Book

“Scott’s Vilnius childhood behind the Iron Curtain adds authenticity to this story . . . A vivid setting and nail-biting events.” —Kirkus Reviews

“Marina Scott's The Hunger Between Us is a gripping, heartbreaking tale that vividly brings to life one of the darkest moments in Russia's history.” —Carolyn Tara O'Neil, author of Daughters of a Dead Empire

“Dark, thrilling, rife with ominous tension, Marina Scott's The Hunger Between Us is a haunting reminder of the human costs of war.” —Amanda McCrina, author of Traitor and The Silent Unseen

“The Hunger Between Us is a story that deftly explores what it means to be human. Scott has woven a beautiful story about hope and friendship in desperate times.” —June Hur, author of The Red Palace