My Seven Black Fathers: A Young Activist's Memoir of Race, Family, and the Mentors Who Made Him Whole (Hardcover) 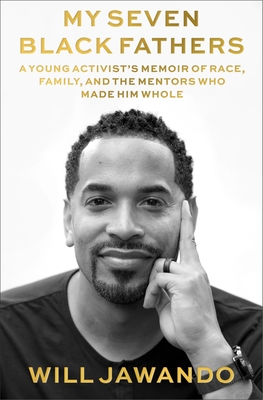 "Will Jawando's account of mentorship, service, and healing lays waste to the racist stereotype of the absent Black father. By arguing that Black fathers are not just found in individual families, but are indeed the treasure of entire Black communities, Will makes the case for a bold idea: that Black men can counter racist ideas and policies by virtue of their presence in the lives of Black boys and young men. This is a story we need to hear." —Ibram X. Kendi, New York Times–bestselling author of How to be an Antiracist

Will Jawando tells a deeply affirmative story of hope and respect for men of color at a time when Black men are routinely stigmatized. As a boy growing up outside DC, Will, who went by his Nigerian name, Yemi, was shunted from school to school, never quite fitting in. He was a Black kid with a divorced white mother, a frayed relationship with his biological father, and teachers who scolded him for being disruptive in class and on the playground. Eventually, he became close to Kalfani, a kid he looked up to on the basketball court. Years after he got the call telling him that Kalfani was dead, another sickening casualty of gun violence, Will looks back on the relationships with an extraordinary series of mentors that enabled him to thrive.

Among them were Mr. Williams, the rare Black male grade school teacher, who found a way to bolster Will’s self-esteem when he discovered he was being bullied; Jay Fletcher, the openly gay colleague of his mother who got him off junk food and took him to his first play; Mr. Holmes, the high school coach and chorus director who saw him through a crushing disappointment; Deen Sanwoola, the businessman who helped him bridge the gap between his American upbringing and his Nigerian heritage, eventually leading to a dramatic reconciliation with his biological father; and President Barack Obama, who made Will his associate director of public engagement at the White House—and who invited him to play basketball on more than one occasion. Without the influence of these men, Will knows he would not be who he is today: a civil rights and education policy attorney, a civic leader, a husband, and a father.

Will Jawando is an attorney, an activist, a community leader, and a councilmember in Montgomery County, Maryland, a diverse community of more than one million residents. Called “the progressive leader we need” by the late congressman John Lewis, Jawando has worked with Speaker Nancy Pelosi, Senator Sherrod Brown, and President Barack Obama. His writing has appeared in The Washington Post and The Root and on BET.com, and his work has been featured in The New York Times and New York magazine and on NPR, NBC News, and MTV. He regularly appears on CNN, MSNBC and other media outlets.

"Throughout My Seven Black Fathers, Jawando uses his current vantage to offer trenchant assessments of his past that branch out into urgent cultural conversations about present-day subjects like respectability politics and the dominant narratives of fatherless households, among others. As Jawando notes, 'The power of these Black male mentors is that they make America a more just place for Black boys and a better place for all Americans.'" —Manuel Betancourt, The New York Times Book Review

"[A] rousing debut . . . Jawando brilliantly uses the arc of his life to root out how 'Black male mentors... make America a more just place for Black boys and a better place for all Americans' . . . Vivid and moving . . . Stirring . . . A powerful call to action in these fraught times." —Publishers Weekly (starred review)

"[Jawando] deftly uses his personal story to provide a trenchant structural analysis of how American racism plays out in Black men’s everyday lives. His talent for creating striking imagery and memorable scenes draws readers into his masterfully constructed world. Jawando treats his past self with compassion without ever skirting responsibility for his mistakes." —Kirkus Reviews (starred review)

"Jawando has written an enlightening, heartfelt memoir that will appeal to readers looking for a ‘different’ all-American story; one that shows the power of community to uplift Black men in the United States." —Leah K. Huey, Library Journal (starred review)

"Will Jawando's account of mentorship, service, and healing lays waste to the racist stereotype of the absent Black father. By arguing that Black fathers are not just found in individual families, but are indeed the treasure of entire Black communities, Will makes the case for a bold idea: that Black men can counter racist ideas and policies by virtue of their presence in the lives of Black boys and young men. This is a story we need to hear." —Ibram X. Kendi, New York Times–bestselling author of How to be an Antiracist

"Will Jawando’s book, My Seven Black Fathers, speaks urgently to the moment. In walking us through his recovery from the wounds of his own father loss, he speaks to our potential for healing as a people and to the incredible resources for becoming whole that are already contained within our communities. His book is the key to unlock that healing." —Jelani Cobb, author of The Substance of Hope: Barack Obama and the Paradox of Progress

"There is nowhere near enough writing about the inner lives of Black folks. Will Jawando’s story is a necessary and important contribution to our understanding of Black men’s grief, pain, and fulfillment. The story of the men who stepped in and helped raise Will not only shows us how present and capable Black men can be and already are within the Black community, but also provides us with an emotional template for Black male interventions that matter, that change the lives of Black boys and young men." —Michael Eric Dyson, New York Times–bestselling author of Tears We Cannot Stop and What Truth Sounds Like

"Research tells us that Black boys who have access to Black fathers and mentors in their communities have a much better chance of navigating the world successfully and overcoming systemic racism to achieve their full potential. Will Jawando’s story poignantly demonstrates this point but also provides critical insight into the form and structure of these relationships, and the power they have to not only transform the lives of Black boys but to rebuild whole communities." —Arne Duncan, former U.S. Secretary of Education

"With dignity, clarity, and compassion, Will Jawando takes readers on a tour of his past through the stories of seven men who mentored, protected, and loved him along the road to adulthood. Written in a voice that is simultaneously bright, sanguine, and affecting, My Seven Black Fathers is an inspiring personal narrative, but it is not an ordinary memoir. Instead, the book is a guidebook on the essential gift of mentorship and how staggeringly transformative it was in the life of one beautiful black boy. But most of all, My Seven Black Fathers is a praise song to the mysteries of human connection, and the resilience that is an inherent part of African American identity." —Emily Bernard, author of Black Is the Body

“[My Seven Black Fathers] oozes with gratitude and grace . . . Like any good storyteller, [Jawando] tells, then lets his tale linger, leaving an impression you'll come back to, time and again.” —Terri Schlichenmeyer, The Washington Informer