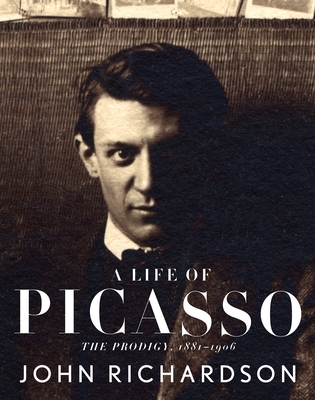 By John Richardson
$35.00
Call for price

This is book number 1 in the A Life of Picasso series.

From the foremost Picasso scholar, the first volume of his Life of Picasso draws on Richardson's close friendship with Picasso, his own diaries, the collaboration of Picasso's widow Jacqueline, and unprecedented access to Picasso's studio and papers to arrive at a profound understanding of the artist and his work.

Combining meticulous scholarship with irresistible narrative appeal, this definitive biography of one of the greatest artists of the twentieth century details the years 1881-1906, from Picasso's beginnings in Spain to age twenty-five in Paris. With more than 800 extraordinary black-and-white illustrations.

John Richardson is the author of a memoir, The Sorcerer’s Apprentice; an essay collection, Sacred Monsters, Sacred Masters; and books on Manet and Braque. He has written for The New York Review of Books, The New Yorker, and Vanity Fair. He was instrumental in setting up Christie’s in the United States. In 1993 he was made a Corresponding Fellow of the British Academy. In 1995–96 he served as the Slade Professor of Fine Art at Oxford University. He divides his time between Connecticut and New York City.

"Sheer brilliance ... the entire volume abounds in vivid historical writing and shrewdly drawn sketches of the key actors ... It is a story to which John Richardson has brought the requisite combination of literary skill, aesthetic sensibility, moral candor and scholarly industry. It will stand as a challenge to future biographers for many years to come." —The Washington Post

"A remarkable achievement on more than one count ... The record is set straight without bias." —The New York Times Book Review