Price Wars: How the Commodities Markets Made Our Chaotic World (Hardcover) 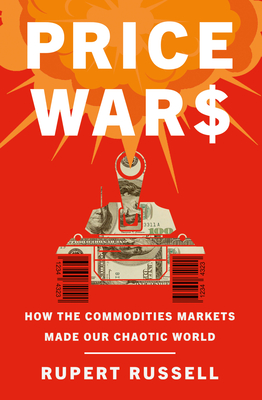 A fascinating, groundbreaking exposé of how commodity traders in New York and London have destabilized societies all over the world, leaving the most vulnerable at the mercy of hunger, chaos, and war.

For Rupert Russell, the Brexit vote was only the latest shock in a decade full of them: the unstoppable war in Syria, huge migrant flows into Europe, beheadings in Iraq, children placed in cages on the U.S. border. In Price Wars, he sets out on a worldwide journey to investigate what caused the wave of chaos that consumed the world in the 2010s.

Russell travels to Tunisia, Iraq, Venezuela, Ukraine, East Africa, and Central America and discovers that unrest in all these places was triggered by dramatic and mysterious swings in the price of essential commodities. Deregulation of the commodities markets means that food prices can shoot up even in years of abundant harvests, causing hunger and protest. Oil prices and real-estate values can surge even when supplies are normal, enriching and emboldening dictators. It is this instability--fueled by banks and hedge funds in faraway New York and London--that has toppled regimes and unsettled the West.

Price Wars is a fascinating, original, and groundbreaking exposé of the power of the commodities markets to disrupt the world.

Rupert Russell is a writer and filmmaker. He has filmed in twenty countries and made two award-winning documentaries. He has a PhD in sociology from Harvard and has published inThe Independent, Dazed, and Salon. Price Wars is his first book.

"Price Wars is a totally original and stimulating read, part war zone reportage, part economic history, and buzzing with ideas about the way markets work that will change your understanding of the world we live in.”
--Liaquat Ahamed, author of Lords of Finance: The Bankers Who Broke the World, winner of the Pulitzer Prize

"An illuminating, sobering and endlessly fascinating look at the root causes and hidden connections between financial markets and some of the developing world’s most wrenching crises. Fearlessly reported from conflict zones from separatist Ukrainian provinces to the Middle East, Russell compellingly draws a line between commodity manipulation on Wall Street and the chaos that fuels extremism and violence."
--Joby Warrick, author of Black Flags: The Rise of ISIS, winner of the Pulitzer Prize

"Price Wars is a thorough and compelling account of political instability generated by the hyper-financialization of commodities. It could not be more timely."
--Zach D. Carter, author of The Price of Peace: Money, Democracy, and the Life of John Maynard Keynes

"In Price Wars, Rupert Russell searches for chaos and finds the butterfly effect of volatile prices operating everywhere. His stories are vivid and his analysis airtight. In his hands, price becomes quantum: we can know its present value or trend, but not both. Is our civilization slowly boiling, or can we simplify our hyper-complexity and tame the chaos we have unleashed through integrated financial markets? This fine book provides compelling answers."
-- Dr. Parag Khanna, author of Connectography and Move

“A fresh look at some of the mostly deeply held dogmas of economics, exploding many along the way.”
--Kirkus

"One of the most important books of our time."
--The Intercept

"Price Wars . . . reveals that hedge fund managers and commodities traders based in the financial hubs of New York and London have manipulated the prices of essentials to maintain their profits . . . Russell argues that this practice has had a butterly effect in contributing to human suffering and exacerbating social and political unrest in countries around the world."
--Attitude Magazine

"Combining investigative courage with forensic analysis, Price Wars is a geopolitical masterpiece bursting with bite, originality and compassion."
--David Lammy, MP, author of Tribes: How Our Need to Belong Can Make or Break Society