O Say Can You Hear?: A Cultural Biography of "The Star-Spangled Banner" (Hardcover) 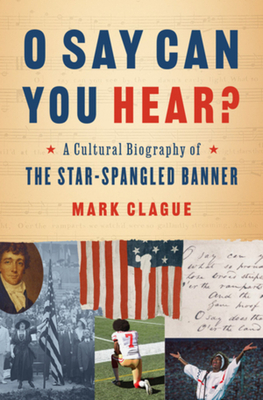 The fascinating story of America’s national anthem and an examination of its powerful meaning today.

Most Americans learn the tale in elementary school: During the War of 1812, Francis Scott Key witnessed the daylong bombardment of Baltimore’s Fort McHenry by British navy ships; seeing the Stars and Stripes still flying proudly at first light, he was inspired to pen his famous lyric. What Americans don’t know is the story of how this everyday “broadside ballad,” one of thousands of such topical songs that captured the events and emotions of early American life, rose to become the nation’s one and only anthem and today’s magnet for controversy.

In O Say Can You Hear? Mark Clague brilliantly weaves together the stories of the song and the nation it represents. Examining the origins of both text and music, alternate lyrics and translations, and the song’s use in sports, at times of war, and for political protest, he argues that the anthem’s meaning reflects—and is reflected by—the nation’s quest to become a more perfect union. From victory song to hymn of sacrifice and vehicle for protest, the story of Key’s song is the story of America itself.

Each chapter in the book explores a different facet of the anthem’s story. In one, we learn the real history behind the singing of the anthem at sporting events; in another, Clague explores Key’s complicated relationship with slavery and its repercussions today. An entire is chapter devoted to some of the most famous performances of the anthem, from Jimi Hendrix at Woodstock to Roseanne Barr at a baseball game to the iconic Whitney Houston version from the 1991 Super Bowl. At every turn, the book goes beyond the events to explore the song’s resonance and meaning.

From its first lines Key’s lyric poses questions: “O say can you see?” “Does that banner yet wave?” Likewise, Clague’s O Say Can You Hear? raises important questions about the banner; what it meant in 1814, what it means to us today, and why it matters.

Mark Clague is professor of musicology and American culture at the University of Michigan, associate dean at the School of Music, Theatre & Dance, and codirector of the American Music Institute. He lives in Ann Arbor, Michigan.

[O Say Can You Hear] matches rigorous scholarship with clear, engaging writing on a wide range of anthem-related questions.

A fascinating history of America's national anthem that examines the origin of the song and the many ways it has been used.
— Glenn A. Altschuler - Star Tribune

A thoughtful and elegant history of America's national anthem.
— The Economist

[A] deeply felt and meticulously researched study that all Americans should read and linger over.
— Peggy Kurkowski - Washington Independent Review of Books

Once a song of unity for a narrow vision of our nation, ‘The Star-Spangled Banner’ has become more controversial as we learn more about its author and history. Drawing on thorough and insightful research, Mark Clague deftly illuminates the many meanings of a complicated anthem.
— Alan Taylor, author of American Republics: A Continental History of the United States, 1783-1850

A fascinating, illuminating contribution to our understanding of the history of the ‘The Star-Spangled Banner’ from its storied birth during the Battle of Baltimore in 1814 to its place today as a cornerstone of twenty-first century culture wars centering on Americans’ emotional attachment to the Stars and Stripes. Highly recommended.
— Marc Leepson, author of What So Proudly We Hailed: Francis Scott Key, A Life

In O Say Can You Hear? Mark Clague shows that the genesis and evolution of our cherished national anthem was always a lightning rod for argument. It is a necessary, timely, and inspiring read.

— Thomas Hampson, Grammy Award-winning baritone and member of the American Academy of Arts and Letters

Mark Clague’s book O Say Can You Hear? jumpstarts a vital conversation about the current relationship of America and Americans to the national anthem. Using “The Star-Spangled Banner” as a lens to examine American history, Clague addresses issues of race, racism, politics, and performance with precision, compassion, insight, and the utmost care.

In contemporary culture wars, where everything gets reduced to partisan politics, Clague’s thoughtful and comprehensive history will resonate.
— Mark Knoblauch - Booklist (starred review)

A fascinating and enlightening story, well told here [...] Clague's book should be in every library.
— Bill Baars - Library Journal