Mad at the World: A Life of John Steinbeck (Paperback) 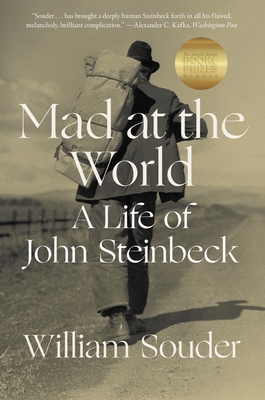 Winner of the 2021 Los Angeles Times Book Prize for Biography

A Publishers Weekly Best Book of 2020 in Nonfiction

A resonant biography of America’s most celebrated novelist of the Great Depression.

The first full-length biography of the Nobel laureate to appear in a quarter century, Mad at the World illuminates what has made the work of John Steinbeck an enduring part of the literary canon: his capacity for empathy. Pulitzer Prize finalist William Souder explores Steinbeck’s long apprenticeship as a writer struggling through the depths of the Great Depression, and his rise to greatness with masterpieces such as The Red Pony, Of Mice and Men, and The Grapes of Wrath. Angered by the plight of the Dust Bowl migrants who were starving even as they toiled to harvest California’s limitless bounty, fascinated by the guileless decency of the downtrodden denizens of Cannery Row, and appalled by the country’s refusal to recognize the humanity common to all of its citizens, Steinbeck took a stand against social injustice—paradoxically given his inherent misanthropy—setting him apart from the writers of the so-called "lost generation."

A man by turns quick-tempered, compassionate, and ultimately brilliant, Steinbeck could be a difficult person to like. Obsessed with privacy, he was mistrustful of people. Next to writing, his favorite things were drinking and womanizing and getting married, which he did three times. And while he claimed indifference about success, his mid-career books and movie deals made him a lot of money—which passed through his hands as quickly as it came in. And yet Steinbeck also took aim at the corrosiveness of power, the perils of income inequality, and the urgency of ecological collapse, all of which drive public debate to this day.

Steinbeck remains our great social realist novelist, the writer who gave the dispossessed and the disenfranchised a voice in American life and letters. Eloquent, nuanced, and deeply researched, Mad at the World captures the full measure of the man and his work.

William Souder’s books include biographies of John Steinbeck, Rachel Carson (a New York Times Notable Book of the Year) and John James Audubon (a finalist for the Pulitzer Prize). He lives in Grant, Minnesota.

Souder’s sympathy for Steinbeck ... is most effective and eloquent in his depiction of the California landscape or of the sea, which he describes as swimming with small pelagic crabs ‘like a crimson carpet spread across an ocean the color of lapis lazuli.’
— Brenda Wineapple - New York Times Book Review

Vividly evokes the landscape ‘between the mountains and by the sea’ that nurtured [Steinbeck’s] love of nature.... [An] appreciative yet clear-eyed assessment.
— Wendy Smith - Boston Globe

Forges a powerful and
courageous path through the life, times, and works of John Steinbeck.... with
discernment, energy, and grace.
— Gavin Jones - California History

Souder’s genial style
has qualities of simplicity, immediacy, and grace that attract readers to
Steinbeck’s writing.... Style and subject are perfect match.... Souder’s
elegant and engrossing biography of Steinbeck adds substantially to our
understanding and appreciation of an author whose feeling for wronged humanity,
like Faulkner’s sense of Southern history, is never out of date.
— William Ray - Steinbeck Review

A brisk and engaging account by a highly-regarded biographer whose estimation of Steinbeck’s importance a half-century after his death is itself testimony to his durability as a writer of fiction and critic of our world.
— Donald Coers - Steinbeck Now

William Souder’s Mad at the World is a stupendous biography of John Steinbeck. By connecting California’s fog, farms, forests and fisheries to Steinbeck’s growth as an artist Souder has elevated the great Nobel Prize–winning novelist to relevancy in today’s depression-stuck America. The backstories on how Steinbeck wrote The Grapes of Wrath and his relationship with marine biologist Ed Ricketts are extraordinary. Throughout the narrative Souder provides first-rate literary analysis and gorgeous prose-styling. This is a book for the ages. Highly recommended!

Brilliance follows brilliance in this illuminating biography of John Steinbeck. William Souder reveals his with a vibrant narrative and prose worthy of the master himself. Every page comes alive with the force of history, the wonder of place, and the friends, strangers, and dogs that shaped the sensibilities of the man who became the conscience of modern America.
— Jack E. Davis, Pulitzer Prize–winning author of The Gulf: The Making of an American Sea

Bracing.... Steinbeck remains widely read and relevant today, as vibrantly illuminated by Mad at the World.