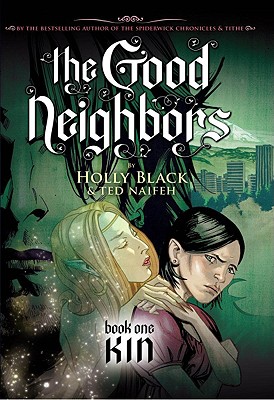 This is book number 1 in the The Good Neighbors series.

“The story centers on Rue, a troubled teen, whose mother has recently disappeared and whose father has been acting strangely ever since. And, if this isn't enough, Rue starts to see weird beings, with horns and wings and animal heads -- the faerie world. This is a fabulous start to a new series, and the book's drawings are startling images of a world where nothing is quite what it seems.”
— Angela Mann, Kepler's Books & Magazine, Menlo Park, CA

Rue Silver's mother has disappeared . . . and her father has been arrested, suspected of killing her. But it's not as straightforward as that. Because Rue is a faerie, like her mother was. And her father didn't kill her mother -- instead, he broke a promise to Rue's faerie king grandfather, which caused Rue's mother to be flung back to the faerie world. Now Rue must go to save her -- and must also defeat a dark faerie that threatens our very mortal world.

Holly Black is the author of the bestselling series The Spiderwick Chronicles (with Tony DiTerlizzi), The Good Neighbors graphic novels, and the novels Tithe, Valiant, and Ironside. She currently lives in the realm of Western Massachusetts.

Ted Naifeh is the author and illustrator of many acclaimed graphic novels, including Polly and the Pirates, Courtney Crumrin and the Night Things, and Courtney Crumrin Tales: Portrait of the Warlock as a Young Man. He has also illustrated the popular Death Jr. and Gloomcookie series.