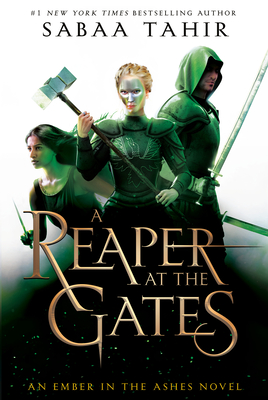 Beyond the Martial Empire and within it, the threat of war looms ever larger.
Helene Aquilla, the Blood Shrike, is desperate to protect her sister's life and the lives of everyone in the Empire. But she knows that danger lurks on all sides: Emperor Marcus, haunted by his past, grows increasingly unstable and violent, while Keris Veturia, the ruthless Commandant, capitalizes on the Emperor's volatility to grow her own power--regardless of the carnage she leaves in her path.

Far to the east, Laia of Serra knows the fate of the world lies not in the machinations of the Martial court, but in stopping the Nightbringer. But in the hunt to bring him down, Laia faces unexpected threats from those she hoped would help her, and is drawn into a battle she never thought she'd have to fight.

And in the land between the living and the dead, Elias Veturius has given up his freedom to serve as Soul Catcher. But in doing so, he has vowed himself to an ancient power that demands his complete surrender--even if that means abandoning the woman he loves.

Sabaa Tahir is the #1 New York Times bestselling author of An Ember in the Ashes and its sequel, A Torch Against the Night. She grew up in California’s Mojave  Desert at her family’s eighteen-room motel. There, she spent her time devouring fantasy novels, raiding her brother’s comic book stash, and playing guitar badly. She began writing An Ember in the Ashes while working nights as a newspaper editor. She likes thunderous indie rock, garish socks, and all things nerd. Sabaa currently lives in the San Francisco Bay Area with her family.

“The book deftly handles serious issues like the costs of genocide and war. Both action-packed and emotionally engaging, A Reaper at the Gates is the perfect summer read.” —The Washington Post

"Fans of the series will not want to miss this action-packed installment." —Bookish

Praise for An Ember in the Ashes

"An Ember in the Ashes glows, burns, and smolders—as beautiful and radiant as it is searing." —Huffington Post

“A harrowing, haunting reminder of what it means to be human—and how hope might be kindled in the midst of oppression and fear.” —The Washington Post

“A worthy novel—and one as brave as its characters.” —The New York Times Book Review

“In a tale brimming with political intrigue and haunted by supernatural forces, the true tension comes from watching Elias and Laia struggle to decide where their loyalties lie.” —Publishers Weekly, starred review


Praise for A Torch Against the Night

“A Torch Against the Night is an unabashed page-turner that scarcely ever pauses for breath.” —The Christian Science Monitor

“An adrenaline rush till the very last page.” —BuzzFeed

“Tahir proves to be a master of suspense and a canny practitioner of the cliffhanger, riveting readers’ attention throughout.…[An] action-packed, breathlessly paced story.” —Booklist, starred review

"This sequel has a darker tone and even higher stakes than its predecessor, setting the stage for a thrilling conclusion." —Publishers Weekly, starred review