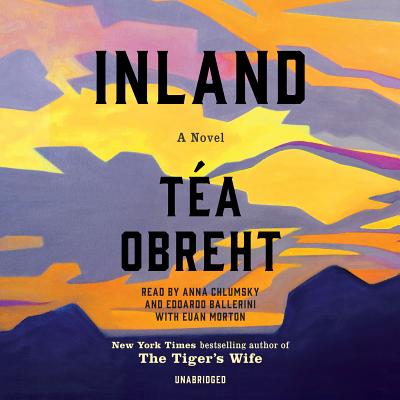 By Téa Obreht , Anna Chlumsky (Read by), Edoardo Ballerini (Read by), Euan Morton (Read by)
$40.00
On Our Shelves Now

“Man, I could live my whole life inside this novel and be perfectly happy. Téa Obreht is the real thing. Inland has the stern gorgeousness of Blood Meridian, the cinematic perfection of Station Eleven, the fantasia-like atmosphere of Cloud Atlas, and the deep-heartedness of The Winter Soldier. This is the sort of novel that makes people want to get up and soldier on. I really loved this book.”
— Erica Eisdorfer, Flyleaf Books, Chapel Hill, NC

NEW YORK TIMES BESTSELLER • The bestselling author of The Tiger’s Wife returns with “a bracingly epic and imaginatively mythic journey across the American West” (Entertainment Weekly).

In the lawless, drought-ridden lands of the Arizona Territory in 1893, two extraordinary lives unfold. Nora is an unflinching frontierswoman awaiting the return of the men in her life—her husband, who has gone in search of water for the parched household, and her elder sons, who have vanished after an explosive argument. Nora is biding her time with her youngest son, who is convinced that a mysterious beast is stalking the land around their home.

Meanwhile, Lurie is a former outlaw and a man haunted by ghosts. He sees lost souls who want something from him, and he finds reprieve from their longing in an unexpected relationship that inspires a momentous expedition across the West. The way in which Lurie’s death-defying trek at last intersects with Nora’s plight is the surprise and suspense of this brilliant novel.

Mythical, lyrical, and sweeping in scope, Inland is grounded in true but little-known history. It showcases all of Téa Obreht’s talents as a writer, as she subverts and reimagines the myths of the American West, making them entirely—and unforgettably—her own.

“As it should be, the landscape of the West itself is a character, thrillingly rendered throughout. . . . Here, Obreht’s simple but rich prose captures and luxuriates in the West’s beauty and sudden menace. Remarkable in a novel with such a sprawling cast, Obreht also has a poetic touch for writing intricate and precise character descriptions.”—The New York Times Book Review (Editors’ Choice)

“Obreht is the kind of writer who can forever change the way you think about a thing, just through her powers of description. . . . Inland is an ambitious and beautiful work about many things: immigration, the afterlife, responsibility, guilt, marriage, parenthood, revenge, all the roads and waterways that led to America. Miraculously, it’s also a page-turner and a mystery, as well as a love letter to a camel, and, like a camel, improbable and splendid, something to happily puzzle over at first and take your breath away at the end.”—Elizabeth McCracken, O: The Oprah Magazine

Téa Obreht’s debut novel, The Tiger's Wife, won the 2011 Orange Prize for Fiction and was an international bestseller. Her work has appeared in The Best American Short Stories, The New Yorker, The Atlantic, Harper’s Magazine, and Zoetrope: All-Story, among many others. Originally from the former Yugoslavia, she now lives in New York with her husband and teaches at Hunter College.

“What Obreht pulls off here is pure poetry. It doesn’t feel written so much as extracted from the mind in its purest, clearest, truest form.”—Entertainment Weekly (Grade: A)

“Inland is a classic story, told in a classic way—and yet it feels wholly and unmistakably new. . . . At once a new Western myth and a far realer story than many we have previously received—and that’s even with all the ghosts.”—NPR

“With Inland, Obreht makes a renewed case for the sustained, international appeal of the American West, based on a set of myths that have been continually shaped and refracted through outside lenses. . . . Discovering the particular genre conventions that Obreht has chosen to transfigure or to uphold soon becomes central to the novel’s propulsive appeal.”—The New Yorker

“It’s a voyage of hilarious and harrowing adventures, told in the irresistible voice of a restless, superstitious man determined to live right but tormented by his past. At times, it feels as though Obreht has managed to track down Huck Finn years after he lit out for the Territory and found him riding a camel. . . . The unsettling haze between fact and fantasy in Inland is not just a literary effect of Obreht’s gorgeous prose; it’s an uncanny representation of the indeterminate nature of life in this place of brutal geography.”—Ron Charles, The Washington Post

“Propulsive . . . Obreht has swapped the tumultuous history of the former Yugoslavia for that of the American frontier. What she retains, in addition to infectious storytelling and a split, double narrative, is the strong sense of superstition which pervades the earlier fiction; a form of magic realism is at work here, which does not detract from the harshly explicit truths transmitted about the nature—and the price—of survival.”—Financial Times

“In a moment where the book world fetishizes self-examination and minute, sentence-level showiness, it is not only a relief but a privilege to see Obreht shoot the moon with this sprawlingly ambitious and fully imagined tale.”—San Francisco Chronicle

“Rivers of blood and ink have been spilled mythologizing the American Southwest, but rarely if ever with the sort of giddy beauty Téa Obreht brings to the page in Inland. . . . [She] displays dazzling dexterity and wit with the English language, transporting the reader to a fantastical late nineteenth century that borders on outright fantasy, where descriptions wax decadent and ghosts are treated as a matter of fact.”—USA Today

"Téa Obreht’s M.O. is clear: She’s determined to unsettle our most familiar, cliché-soaked genres. . . . Inland can feel like Cormac McCarthy’s Blood Meridian turned inside out: contemplative rather than rollicking, ghostly rather than blood-soaked.”—Minneapolis Star Tribune