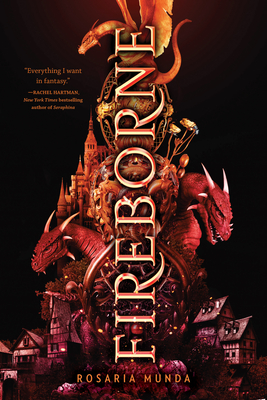 This is book number 1 in the THE AURELIAN CYCLE series.

"Fireborne is everything I want in fantasy."--Rachel Hartman, New York Times bestselling author of Seraphina

Annie and Lee were just children when a brutal revolution changed their world, giving everyone--even the lowborn--a chance to test into the governing class of dragonriders.

Now they are both rising stars in the new regime, despite backgrounds that couldn't be more different. Annie's lowborn family was executed by dragonfire, while Lee's aristocratic family was murdered by revolutionaries. Growing up in the same orphanage forged their friendship, and seven years of training have made them rivals for the top position in the dragonriding fleet.

But everything changes when survivors from the old regime surface, bent on reclaiming the city.

With war on the horizon and his relationship with Annie changing fast, Lee must choose to kill the only family he has left or to betray everything he's come to believe in. And Annie must decide whether to protect the boy she loves . . . or step up to be the champion her city needs.

From debut author Rosaria Munda comes a gripping adventure that calls into question which matters most: the family you were born into, or the one you've chosen.

Rosaria grew up in rural North Carolina, where she climbed trees, read Harry Potter fanfiction, and taught herself Latin. She studied political theory at Princeton and lives in Chicago with her husband and cat.

★ "From the beginning, this book pulls readers in . . . full of drama, emotional turmoil, and high stakes." —Kirkus, starred review

"From action fans to romance fans, political junkies to fantasy lovers, many different audiences will find something rewarding here." —The Bulletin of the Center for Children’s Books

"Fireborne is everything I want in fantasy." —Rachel Hartman, New York Times bestselling author of Seraphina

“It’s been a long time since a book made me this happy. Fireborne is my new favorite dragon book.” —Kristen Ciccarelli, internationally bestselling author of The Last Namsara