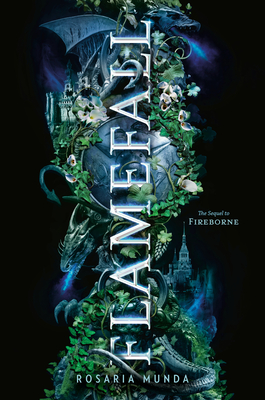 This is book number 2 in the THE AURELIAN CYCLE series.

Revolutionary flames ignite around Annie, Lee, and a brand new character in the follow-up to Fireborne--now in paperback!

After fleeing the revolution and settling into the craggy cliffs of New Pythos, the dragonlords are eager to punish their usurpers and reclaim their city. Their first order of business was destroying the Callipolan food supply. Now they're coming for the dragonriders.

Annie is Callipolis's new Firstrider, charged with leading the war against New Pythos. But with unrest at home, enforcing the government's rationing program risks turning her into public enemy number one.

Lee struggles to find his place after killing kin for a leader who betrayed him. He can support Annie and the other Guardians . . . or join the rebels who look to topple the new regime.

Griff, a lowborn dragonrider who serves New Pythos, knows he has no future. And now that Julia Stormscourge is no longer there to protect him, he is called on to sacrifice everything for the lords that oppress his people--or to forge a new path with the Callipolan Firstrider seeking his help.

With famine tearing Callipolis apart and the Pythians determined to take back what they lost, it will be up to Annie, Lee, and Griff to decide who--and what--to fight for.

Rosaria Munda grew up in rural North Carolina, where she climbed trees, read Harry Potter fanfiction, and taught herself Latin. She studied political theory at Princeton and lives with her husband in Chicago. Her debut young adult fantasy, Fireborne, was published in 2019.

★ "Much like its predecessor, this second book in the “Aurelian Cycle” trilogy finds its strength in complex, compelling characters and thought-provoking socio-political intrigue. Amid the politics there are plenty of dragon battles, clandestine missions, and secret meetings to keep readers flying through the pages, ending with a nail-biting cliffhanger. Highly recommended for middle and high school readers." —School Library Journal, starred review

“Point-of-view chapters show complexities, provoking readers to think. In addition to the central will-they, won’t-they love story, there is a lovely subplot with a same-sex, cross-class romance. Exciting aerial battles, political machinations, and a bit of romance make this hard for readers to put down.” —Kirkus

“Flamefall is the kind of book that becomes an intensified experience when you read it under the cover of a rainstorm. I was riveted from the moment I opened this book, and let me just tell you, I couldn’t imagine this story going the way that it did. It’s intricate and so incredibly well thought out. Everything feels like it’s being held back for the right moment to be revealed and when it finally is…wow. Get it on your TBR list, because you’re going to want it on your shelf!” —The Nerd Daily

“Flamefall, takes what worked about Fireborne and builds upon it, crafting a surprisingly thoughtful and multifaced story that provokes readers to think in ways that few other YA trilogies are even attempting at the moment… The sequel is surprisingly thoughtful about the way it discusses politics and systems of government, putting our faves at odds over multiple issues, but in ways that are easy to understand and even support. These are complex problems that don’t have easy solutions – even when you have dragons involved – and Flamefall doesn’t shy away from showing real, and often terrible consequences on both sides.” —Culturess

“Flamefall is so much more than just a middle book in a trilogy. This book is absolutely fantastically written and thoroughly plotted. It is riveting right from the start and keeps the reader turning pages all the way until the shocking, cliffhanger end. Riveting, atmospheric, and thought-provoking, Flamefall is a stunning YA fantasy read that will leave the reader breathless. Highly recommend for fans of Red Queen, Shatter The Sky, and Throne of Glass.” —YA Books Central