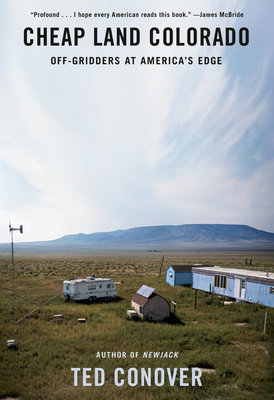 From Pulitzer Prize finalist and National Book Critics Circle Award–winning author of Newjack, a passage through an America lived wild and off the grid, where along with independence and stunning views come fierce winds, neighbors with criminal pasts, and minimal government and medical services.

“In these dispatches, [Conover] invites readers to ride shotgun along an unraveling edge of the American West, where sepia-toned myths about making a fresh start collide with modern modes of alienation, volatility, and exile.... In a nation whose edges have come to define its center, this is essential reading.”—Jessica Bruder, author of Nomadland: Surviving America in the Twenty-First Century

In May 2017, Ted Conover went to Colorado to explore firsthand a rural way of life that is about living cheaply, on your own land—and keeping clear of the mainstream. The failed subdivisions of the enormous San Luis Valley make this possible. Five-acre lots on the high prairie can be had for five thousand dollars, sometimes less.

Conover volunteered for a local group trying to prevent homelessness during the bitter winters. He encountered an unexpected diversity: veterans with PTSD, families homeschooling, addicts young and old, gay people, people of color, lovers of guns and marijuana, people with social anxiety—most of them spurning charity and aiming, and sometimes failing, to be self-sufficient. And more than a few predicting they’ll be the last ones standing when society collapses.

Conover bought his own five acres and immersed himself for parts of four years in the often contentious culture of the far margins. He found many who dislike the government but depend on its subsidies; who love their space but nevertheless find themselves in each other’s business; who are generous but wary of thieves; who endure squalor but appreciate beauty. In their struggles to survive and get along, they tell us about an America riven by difference where the edges speak more and more loudly to the mainstream.

TED CONOVER is the author of several books, including Newjack: Guarding Sing Sing, which won the National Book Critics Circle Award for nonfiction and was a finalist for the Pulitzer Prize. His writing has appeared in The New York Times Magazine, The Atlantic, The New Yorker, Harper’s Magazine, and National Geographic. He is a professor at, and the former director of, New York University’s Arthur L. Carter Journalism Institute.

“One of our great narrative journalists . . . Conover’s approach isn’t so much about pinning people down as letting them reveal themselves. He’s such a wry and nimble writer that much of the time this works, yielding rounded portraits that are full of ambiguity, anguish and contradiction.”—Jennifer Szalai, The New York Times

“Engrossing . . . Nothing motivates the journalist Ted Conover like a no-trespassing sign. . . . One of Conover’s strengths as a writer is that he is willing to let his subjects ‘say their piece.’ He is wonderfully open to people’s understanding of themselves, even when he sees the world very differently. . . . With his thorough and compassionate reportage, Conover conjures a vivid, mysterious subculture populated by men and women with riveting stories to tell. To read Cheap Land Colorado is to take a drive through a disquieting, beguiling landscape with an openhearted guide, windows down, snacks in the cooler, no GPS. It’s a ride I didn’t want to end.”—Jennifer Reese, The Washington Post

“Consistently interesting to read . . . Full of remarkable characters . . . Conover has a good eye for the particularity of life on the flats.”—Kathryn Schulz, The New Yorker

“A raw, revealing, and effective look at life on the rural perimeters of society.”—Julie Whiteley, Library Journal

“[Cheap Land Colorado] is richly detailed and filled with empathy for those living life on the margins and the stunning landscape that surrounds them.”—Nicholas Hunt, 5280

“Over the years, Conover has mastered the difficult balance that first-person reportage requires; he is a character in the story — an observer, participant and narrator — but the story is not about him. . . . The strength of this book lies in Conover’s voice, confident, observant, nonjudgmental.”—Laurie Hertzel, Minneapolis Star-Tribune

“A unique take on journalism . . . [Conover] may have certain feelings about what people say or what he sees people do and, when appropriate, comments. But he continually strives to suspend judgment.”—Priscilla Waggoner, Alamosa Valley Courier

“A profound book that reads like a novel and will have you laughing a little and thinking a lot. The pathos that emerges from behind the dusty homes of the San Luis Valley is unlike anything that most will ever see – there is an enormous amount of love and humanity and raw courage in these people who have the guts to turn away from what we’ve become. I hope every American reads this book.”—James McBride, author of Deacon King Kong

“Cheap Land Colorado cements Conover among our greatest subcultural storytellers. In these dispatches, he invites readers to ride shotgun along an unraveling edge of the American West, where sepia-toned myths about making a fresh start collide with modern modes of alienation, volatility, and exile. Unflinchingly candid and eternally big-hearted, Conover brings the frontier and its denizens into focus without blurring any contradictions: splendor and brutality, freedom and deprivation, hospitality alongside a deep-seated unease. In a nation whose edges have come to define its center, this is essential reading.”—Jessica Bruder, author of Nomadland: Surviving America in the Twenty-First Century

“Ted Conover has produced an intimate, vivid, and deeply engrossing portrait of a modern American frontier. Amid the loneliness, crime, addiction, trauma, poverty, and social marginalization that Conover witnessed, he also discovered deep veins of generosity, tolerance, beauty, and love. The result is a moving chronicle of people whom few of us have encountered but whom all of us can recognize.”—Luke Mogelson, author of The Storm Is Here

“Ted Conover has made a career of entering forgotten or marginal American lives and being with those people until he knows them from the inside out. It takes a special empathy, not to say an extraordinary commitment of time, to accomplish his kind of reportage. It seems fundamentally an act of respect. In this account of some back-of-the-moon Colorado lives, he is never once above the folks about whom he is writing. I bet they would say so themselves. I couldn’t read the book fast enough.”—Paul Hendrickson, author of Hemingway’s Boat: Everything He Loved in Life, and Lost

“There are few writers as good as Ted Conover at capturing, all at once, the vulnerability and agency of real lives. Cheap Land Colorado is an attentive portrait of rural poverty—of people flung to the margins by an American game of roulette. It is a deeply honest and meticulously reported book, full of grit, humor, violence, beauty, and contradiction, set on the ever-shifting plain of our nation’s values.”—Sierra Crane Murdoch, author of Yellow Bird

“Ted Conover is a national literary treasure, a master of empathic storytelling and immersive reporting. In Cheap Land Colorado, he turns his gaze onto a corner of his home state that few tourists would notice: the harsh and beautiful San Luis Valley, the site of an old land swindle, now turned into a dice-throw of trailers and last chance houses scattered across the prairie, occupied by tough-minded people who don’t want to belong anywhere else. Conover moves in, slows down, breathes deep, listens and learns. A gorgeously observed portrait of the fringes of mainstream society.”—Tom Zoellner, author of Island on Fire

“Ted Conover has fashioned a career out of noticing the human landscapes many of us ignore. In Cheap Land Colorado, among the disenfranchised and the idealists, he invites us into a community where the border between surviving and thriving isn’t always clear. This work soars with the poetry of vast open spaces, and with people crafting rugged, intentional lives even as they face unknown futures. Cheap Land Colorado secures Conover’s place as one of the most gifted literary journalists working today.”—Rachel Louise Snyder, author of No Visible Bruises

“Ted Conover is the gold standard of narrative nonfiction.”—Sam Quinones, author of Dreamland

“Most Americans have never heard of the San Luis Valley: the huge, high, flat area at the headwaters of the Rio Grande. And most have never given a thought to the people there who live on the off-grid edge of American society, and what they might tell us about ourselves. As he has so often in the past, Ted Conover immerses himself in the lives of these forgotten men and women—and emerges with an unforgettable portrait of a slice of American society today.”—Charles C. Mann, author of 1491

“Sharp, balanced . . . With empathy, compassion, and skillful storytelling, Conover engagingly shares the dreams and realities of those he met and befriended, offering a window into a community that few readers will ever experience. A captivating portrait of a community on the fringes.”—Kirkus Reviews (starred review)

“Conover continues his own brand of immersion journalism. . . . [His] ability to depict all characters he encounters with grace and dignity shows a restraint that makes this a work to be devoured by readers from empty, forgotten places and beyond.”—Booklist