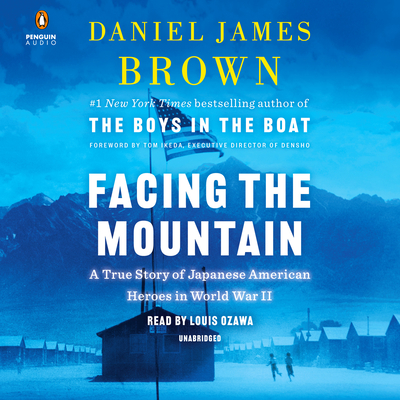 Winner of the Christopher Award

“Masterly. An epic story of four Japanese-American families and their sons who volunteered for military service and displayed uncommon heroism… Propulsive and gripping, in part because of Mr. Brown’s ability to make us care deeply about the fates of these individual soldiers...a page-turner.” – Wall Street Journal

From the #1 New York Times bestselling author of The Boys in the Boat, a gripping World War II saga of patriotism and resistance, focusing on four Japanese American men and their families, and the contributions and sacrifices that they made for the sake of the nation.

In the days and months after Pearl Harbor, the lives of Japanese Americans across the continent and Hawaii were changed forever. In this unforgettable chronicle of war-time America and the battlefields of Europe, Daniel James Brown portrays the journey of Rudy Tokiwa, Fred Shiosaki, and Kats Miho, who volunteered for the 442nd Regimental Combat Team and were deployed to France, Germany, and Italy, where they were asked to do the near impossible. Brown also tells the story of these soldiers' parents, immigrants who were forced to submit to life in concentration camps on U.S. soil. Woven throughout is the chronicle of Gordon Hirabayashi, one of a cadre of patriotic resisters who stood up against their government in defense of their own rights. Whether fighting on battlefields or in courtrooms, these were Americans under unprecedented strain, doing what Americans do best—striving, resisting, pushing back, rising up, standing on principle, laying down their lives, and enduring.

Daniel James Brown is the author of The Indifferent Stars Above and Under a Flaming Sky, which was a finalist for the B&N Discover Great New Writers Award, as well as The Boys in the Boat, a New York Times bestselling book that was awarded the ALA’s Andrew Carnegie Medal for Excellence in Nonfiction. He has taught writing at San José State University and Stanford University. He lives outside Seattle.

"The story of the fearless men of the 442nd Regiment feels especially relevant, with Asian Americans once again under attack."—New York Post

“Facing the Mountain is more than just the story of a group of young men whose valor helped save a country that spurned them, it's a fascinating, expertly written look at selfless heroes who emerged from one of the darkest periods of American history — soldiers the likes of which this country may never see again.”—NPR.org

“Masterly… An epic story of four Japanese-American families and their sons who volunteered for military service and displayed uncommon heroism and grit to serve their country... propulsive and gripping read… it’s a page-turner—a testament to Mr. Brown’s storytelling gifts.”—Wall Street Journal

“Brown combines history with humanity in a tense, tender and well-researched study of the lives disrupted and disregarded by misperceptions and misinformation. Facing the Mountain is  ‘not a story about victims,’ as Brown writes. Rather, ‘It’s a story of victors, of people striving, resisting, rising up, standing on principle, laying down their lives, enduring and prevailing.”—San Francisco Chronicle

“Facing the Mountain… promises the story of the legendary 442nd Infantry Regiment during World War II. It delivers much more…Daniel James Brown shows us what America looks like to an immigrant or member of an ethnic minority….Brown’s vivid narrative tells a more important story about heroism and sacrifice, one that should be read by anyone who hopes to understand more about ‘the greatest generation’ and American history"—Army Magazine

“This is a masterwork of American history that will change the way we look at World War II. You don’t just read a Daniel James Brown story—you go there. Facing the Mountain is lump-in-the-throat territory, page after page."—Adam Makos, author of A Higher Call

"Daniel James Brown has a way of wrapping himself around a big and complicated subject with such subtlety and grace that we don’t at first realize how fast the pages are turning, or how much fascinating material we've absorbed. In Facing the Mountain, all the skills of this master storyteller are once again on display, as he surely leads us to the emotional heart of a fraught and sprawling World War II story most of us knew nothing about." —Hampton Sides, NYT bestselling author of Ghost Soldiers and On Desperate Ground

“The loyal and often heroic service of Japanese American soldiers is one of history’s most inspiring responses to bigotry and oppression.  Daniel James Brown brilliantly pairs these events in an epic of courage and resistance.”—David Laskin, author of The Long Way Home

“Facing the Mountain proves that the savagery of war isn’t restricted to foreign battlefields. Many went to war - those who remained incarcerated endured the wrath of their fellow countrymen.  It is said that to be an American we should strive to live life worthy of the sacrifices of those who came before us. Our bearing with each other is dependent on it.”
—Lt Col Michael J. Yaguchi, USAF (ret), Commander, Nisei Veterans Committee

"Daniel James Brown has done it again.  HIs rich, nuanced recreation of the dark years when thousands of our fellow citizens were incarcerated because of their ancestry is a must-read contribution to the history of the 20th century. It’s also uplifting. I'll never look at the World War II story in the same light."—Timothy Egan, author of The Worst Hard Time

“A must-read. You will not be able to put it down.”—Scott Oki, former VP Microsoft, Founder, Densho

“Facing the Mountain arrives at the perfect time, to remind us of the true meaning of patriotism. In Daniel James Brown’s gifted hands, these overlooked American heroes are getting the glory they deserve. Read this book and know their stories.”—Mitchell Zuckoff, author of Lost in Shangri-La

“Daniel James Brown brings to life the gripping true story of Japanese Americans whose steely heroism fought Nazism abroad and racism at home.  Bound by Japanese values of filial piety, giri (social obligation) and gaman (endurance) and forged in the crucible of brutal combat, the soldiers served the very country that locked their families in American concentration camps for no crime other than looking like the enemy while camp resisters fought for justice denied.”—Lori L. Matsukawa, News anchor, KING TV, Seattle

“This book’s breadth and depth are unparalleled as it poignantly traces the Japanese American thread in the rich fabric of America.  We meet compelling individuals, witness war's horrors and celebrate moments of triumph of the human spirit.  The author vividly describes communities confronting prejudice with resilience and patriotism, surviving and ultimately having the opportunity to thrive.”—Terry Shima, T/4, 442nd Regimental Combat Team

“Riveting. Facing the Mountain is a book that is as much about the present as it is about the past. In it are vital lessons about courage, truth, justice, and an abiding love of country. Drawing on impeccable historic research, the narrative movingly shines the light of history on prejudice and discrimination and the unfinished struggle for a more just future.”—Ann Burroughs, President & CEO,  Japanese American National Museum

“Brown chronicles in this this bravura account the experiences of Japanese American soldiers and their families during WWII. . . . The result is an illuminating and spirited portrait of courage under fire.”—Publishers Weekly, starred review

“A deep and richly detailed examination of indelible decisions and events that tarnished the legacy of America's role in WWII, the internment of Japanese Americans. . . . A compelling and impressively redefining work on an often over-simplified and always consequential subject. . . . This should also be read by all who are pondering the true meaning of patriotism.”—Booklist, starred review