The Profession: A Memoir of Policing in America (Paperback) 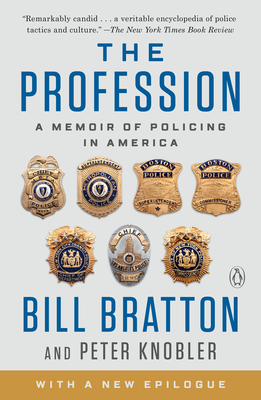 “Engaging. . . a remarkably candid account. . . Succeeding as a centrist in public life these days can be an almost impossible task. But centrism in law enforcement may be the most delicate challenge of all. Bratton’s ability to practice it was a startling phenomenon.” –New York Times Book Review

When Bill Bratton became a Boston street cop after his return from serving in Vietnam, he was dismayed by the corrupt old guard, and it is fair to say the old guard was dismayed by him, too. But his success fighting crime could not be denied. Propelled by extraordinary results, Bratton had a dazzling rise, and ultimately a dazzling career, becoming the most famous police commissioner of modern times. The Profession is the story of that career in full.

Everywhere he went, Bratton slashed crime rates and professionalized the vocation of the cop. He and his team created the revolutionary program CompStat, the Big Bang of modern data-driven policing. But his career has not been without controversy, and central to the reckoning of The Profession is the fundamental crisis of relations between the Black community and law enforcement; a crisis he now believes has been inflamed by the unforeseen consequences of some well-intentioned policies. Building trust between a police force and the community it is sworn to protect is in many ways, Bratton argues, the first task--without genuine trust in law enforcement to do what is right, little else is possible.

The Profession is both a searching examination of the path of policing over the past fifty years, for good and also for ill, and a master class in transformative leadership. Bill Bratton was never brought into a police department to maintain the status quo; wherever he went--from Boston in the '80s to the New York Police Department in the '90s to Los Angeles after the beating of Rodney King to New York again in the era of unchecked stop-and-frisk--root-and-branch reinvention was the order of the day and he met the challenge. There are few other positions on Earth in which life-and-death stakes combine with intense public scrutiny and turbulent political crosswinds as they do for the police chief of a major American city, even more so after counterterrorism entered the mix in the twenty-first century. Now more than ever, when the role of the police in society is under a microscope like never before, Bill Bratton's authority on the subject of improving law enforcement is profoundly useful. A riveting combination of cop stories and community involvement, The Profession presents not only a fascinating and colorful life at the heights of law-enforcement leadership, but the vision for the future of American policing that we sorely need.

“Succeeding as a centrist in public life these days can be an almost impossible task. But centrism in law enforcement may be the most delicate challenge of all. Bratton’s ability to practice it was a startling phenomenon. Engaging . . . a remarkably candid account . . . a veritable encyclopedia of police tactics and culture. . . . It may be true, as Yeats chillingly reminded us, that the center cannot hold. It doesn’t seem to be holding in public life at the moment. But at certain times, in the right hands and circumstances, it does come forward.” —New York Times Book Review

“From no matter what angle you look at the debate of how we police ourselves, this book is timely and vitally important. Half memoir, half philosophy, this is the bible on police reform and reconciliation with community. Told by a man who changed policing in three major cities, The Profession by Bill Bratton brings deep and new understanding to what it means to protect and serve—from both sides of the badge.” —Michael Connelly, author of The Law of Innocence

“If then-NYPD Commissioner Bill Bratton had done nothing other than rescue New York City in the early ‘90s from intolerable violence, he’d still be regarded as the most impactful police reformer of the past forty years. Now in The Profession, Bratton and his co-writer, Peter Knobler, have written a fast-paced tale of his full career, including his seven years as reform chief of the LAPD, and his return as NYPD commissioner, where he permanently ended shamefully racist mass stop-and-frisk policies. The Profession is a must read for anyone wanting to understand how to make policing reform happen in the 2020s.” —Joe Domanick, associate director of The Center on Media, Crime and Justice, John Jay College of Criminal Justice

“Bill Bratton has gone from street cop to America’s police commissioner. There is no more authoritative voice on policing in America. The lessons learned in this book are invaluable.” —Jeh Johnson, former Secretary of Homeland Security

“Bill Bratton is the most pivotal and powerful voice in American law enforcement in these times. His candid, revealing story is a must read for every mayor, police chief, and community leader who truly wants to transform law enforcement and create community trust in the twenty-first century.” —Marc Morial, CEO of the National Urban League and former mayor of New Orleans

“Bill Bratton sounds a clarion call for racial truth. He takes us on a fifty-year odyssey of transformation and redemption through the worlds of policing, community, and power politics. Bratton reveres the best in law enforcement, demands changes in the worst, and confronts racism in every police department along the way. As a civil rights lawyer and likely foe, I became Bratton’s unlikely ally to change LAPD, because, with moral clarity, he admitted policing’s role in racial unrest and its original sin on American slave ships. Twenty million marched to protest racism in policing. The Profession is a voice police and community need to hear.” —Connie Rice, civil rights lawyer and author of Power Concedes Nothing

“Bill Bratton is truly the Sir Robert Peel of American policing. In The Profession, he takes readers on a gripping literary ride-along and provides an intimate look into the complex world of policing. The knowledge gleaned from this book can't be found elsewhere.” —Art Acevedo, former chief of police, Miami Police Department

“The Profession chronicles Bill Bratton's unparalleled career while tackling the ongoing challenges of race and policing in America. As police executives across the country look to reform their agencies, his life story is an inspiring tale of what can be done through hard work, imagination, and determination.” —Chuck Wexler, executive director of the Police Executive Research Forum