Lady Justice: Women, the Law, and the Battle to Save America (Hardcover) 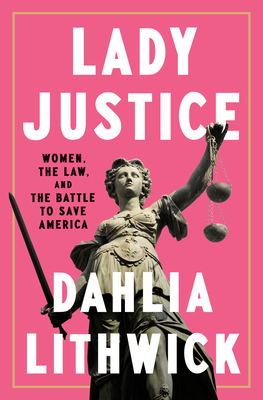 “In Dahlia Lithwick’s urgent, engaging Lady Justice, Dobbs serves as a devastating bookend to a story that begins in hope.”—Boston Globe

Dahlia Lithwick, one of the nation’s foremost legal commentators, tells the gripping and heroic story of the women lawyers who fought the racism, sexism, and xenophobia of Donald Trump’s presidency—and won

After the sudden shock of Donald Trump’s victory over Hillary Clinton in 2016, many Americans felt lost and uncertain. It was clear he and his administration were going to pursue a series of retrograde, devastating policies. What could be done?

Immediately, women lawyers all around the country, independently of each other, sprang into action, and they had a common goal: they weren’t going to stand by in the face of injustice, while Trump, Mitch McConnell, and the Republican party did everything in their power to remake the judiciary in their own conservative image. Over the next four years, the women worked tirelessly to hold the line against the most chaotic and malign presidency in living memory. There was Sally Yates, the acting attorney general of the United States, who refused to sign off on the Muslim travel ban. And Becca Heller, the founder of a refugee assistance program who brought the fight over the travel ban to the airports. And Roberta Kaplan, the famed commercial litigator, who sued the neo-Nazis in Charlottesville. And, of course, Stacey Abrams, whose efforts to protect the voting rights of millions of Georgians may well have been what won the Senate for the Democrats in 2020.

These are just a handful of the stories Lithwick dramatizes in thrilling detail to tell a brand-new and deeply inspiring account of the Trump years. With unparalleled access to her subjects, she has written a luminous book, not about the villains of the Trump years, but about the heroes. And as the country confronts the news that the Supreme Court, which includes three Trump-appointed justices, will soon overturn Roe v. Wade, Lithwick shines a light on not only the major consequences of such a decision, but issues a clarion call to all who might, like the women in this book, feel the urgency to join the fight. A celebration of the tireless efforts, legal ingenuity, and indefatigable spirit of the women whose work all too often went unrecognized at the time, Lady Justice is destined to be treasured and passed from hand to hand for generations to come, not just among lawyers and law students, but among all optimistic and hopeful Americans.

Dahlia Lithwick is the senior legal correspondent at Slate, a news and politics analyst at MSNBC, and host of Amicus, Slate’s award-winning biweekly podcast about the law. Her work has also appeared in The New York Times, Harper’s Magazine, The New Yorker, The Washington Post, The New Republic, and Commentary, among other places. Lithwick won a 2013 National Magazine Award for her columns on the Affordable Care Act. She was inducted into the American Academy of Arts and Sciences in October 2018.

“Stirring . . . Lithwick’s approach, interweaving interviews with legal commentary, allows her subjects to shine. She unabashedly casts them as heroines with the tenacity and courage to resist governmental pressure at crucial moments, but at the same time she rejects a simplistic, naïve narrative of social progress . . . Inspiring.” —The New York Times Book Review

“Lady Justice isn’t just an important historical document but a necessary guide right now . . . Lithwick’s book insists that there’s simply no time for the sense of helplessness currently felt by so many pro-choicers, feminists and those who don’t believe that a fetus should have more rights than a woman. In other words, Lady Justice is right on time . . . Lithwick writes that 'we have a long way to go, the road will be bumpy, and the destination still feels less than clear.' She’s right. But lucky for us, she’s drawn an excellent map.” —Jill Filipovic, Washington Post

“In Dahlia Lithwick’s urgent, engaging Lady Justice, Dobbs serves as a devastating bookend to a story that begins in hope.” —Boston Globe

“Wholly inspirational . . . As Lithwick underscores, the Supreme Court’s life-altering Dobbs decision, which ended federal protection for abortion, only underscores the rousing urgency of these 21st-century profiles in courage.” —Oprah Daily

“In Slate and in her podcast Amicus, lawyer-journalist Lithwick has distinguished herself as a wise and insightful analyst of law and the courts. Her revelatory new book celebrates the contemporary women lawyers who, building on the work of the late activist and lawyer Pauli Murray, challenged Trumpism, fighting the Muslim ban and working for reproductive freedom and voting rights. These lawyers are heroes, and Lithwick brings a special gravity to the book when she reflects on her own experiences working on the 9th Circuit, especially during the Brett Kavanaugh confirmation hearings.” —National Book Review

“Lithwick’s writing is friendly to lay readers and marked by her trademark pithy wit and an endearing faith in the promise of the legal system. ‘Women plus law equals magic,’ she concludes . . . Required reading for this post-Dobbs world.” —Kirkus (starred review)

“Whipsmart and wickedly acerbic, Lithwick shines a reassuring light on the essential interconnectivity between women and the law and champions the vital role women lawyers must continue to play if American democracy is to persevere.” —Booklist (starred review)

“‘American women,’ Dahlia Lithwick argues in this galvanizing book, ‘have a special relationship with the law. They’re exceptionally good at it.’ By telling the stories of heroic women who have changed the law over the past decades through their commitment to the principles of equal justice for all—from Pauli Murray and Ruth Bader Ginsburg to contemporary litigators and public officials—Lithwick inspires women and men to live up to their shining example.” —Jeffrey Rosen, author of Conversations with RBG: Ruth Bader Ginsburg on Life, Love, Liberty, and Law

“Dahlia Lithwick offers her brilliant perspective on the intersection of feminism, law, and politics in Lady Justice. This is a captivating account of the ways in which women have fought the injustices of the Trump administration and others like it. Lithwick sharply captures the contributions of many trail-blazing women, and her narrative comes at a pivotal moment in the history of women’s rights in America. Everyone should learn the stories of these women pioneers. These are astounding profiles of courage and character.” —Preet Bharara, former U.S. attorney and New York Times bestselling author of Doing Justice

“Dahlia Lithwick’s Lady Justice is an account of some of the extraordinary women lawyers to whom this country owes a debt for their leadership and fearless advocacy during some of the darkest days of the Trump administration. We may have forgotten some of the details as we continue to navigate this challenging moment in our democracy, but Lithwick jars our memories, ensuring that the historical record of this period will include the critical contribution of ten brilliant women attorneys whose fierce commitment to justice and democracy helped save our country.” —Sherrilyn Ifill, former president & director-counsel, NAACP Legal Defense & Educational Fund, Inc.

“Lady Justice showcases Dahlia Lithwick’s singular talents as an astute observer of the law’s impact on society and as a gifted raconteur. She deftly weaves together the narratives of women lawyers who are holding our legal system accountable for safeguarding an inclusive democracy, one that lives up to our Constitution’s promise. Through Lithwick’s compelling storytelling, we experience her subjects’ passion for a more just world and applaud their strategies for how to get there. And we cannot help but want to join them in the cause.” —Anita Hill, law professor and author of Believing: Our Thirty-Year Journey to End Gender Violence

“I am so grateful for Dahlia Lithwick. With Lady Justice, she ensures that the histories of this terrible period in America will not be filled only with malevolent grifters, swindlers, and autocrats bound to destroy democratic systems, but also with the driven, brilliant, and ingenious women who have been working tirelessly to save the best of what this country offers from its worst actors. Lithwick is a wonderful storyteller and her acute grasp on the stakes—and nuances—of these fights is unparalleled. Lady Justice arrives at a difficult time, but its energetic proposition—that in righteous hands, the law remains a powerful tool with which to build a better world—offers an unexpected glimmer of hope.” —Rebecca Traister, author of Good and Mad: The Revolutionary Power of Women’s Anger

“Lady Justice is a gripping, moving, dramatic account of people at their best and worst and how they shaped the republic over the last five years. No one brings writing about the law to life like Dahlia Lithwick with her combination of deep knowledge, strong reporting, and pithy wit. This is a book about the valiant women lawyers who stood up for human rights and truth through the storms of the Trump era. While the history in it is important, the book is also a fascinating and vividly written gallop through those years.” —Rebecca Solnit, author of Orwell’s Roses

“This elegantly written book is at once a chronicle of the Trump years, a celebration of the rule of law and the women who uphold it, and a paean to American democracy. Smart, incisive, and engaging, it is a must read not only for its recounting of the events of those dangerous four years but for its evocation of the resolve, courage, and principles of those women holding the line against the rise of authoritarianism, not least of whom is Dahlia Lithwick herself.” —Heather Cox Richardson, author of How the South Won the Civil War and the newsletter, Letters from an American