The Turning Point: 1851--A Year That Changed Charles Dickens and the World (Hardcover) 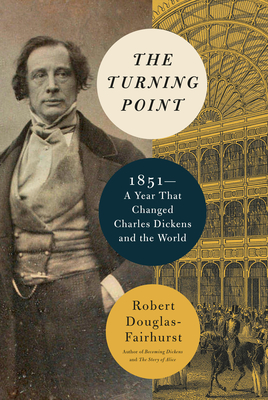 A major new biography that takes an unusual and illuminating approach to the great writer—immersing us in one year of his life—from the award-winning author of Becoming Dickens and The Story of Alice.

The year is 1851. It's a time of radical change in Britain, when industrial miracles and artistic innovations rub shoulders with political unrest, poverty, and disease. It is also a turbulent year in the private life of Charles Dickens, as he copes with a double bereavement and early signs that his marriage is falling apart. But this formative year will become perhaps the greatest turning point in Dickens's career, as he embraces his calling as a chronicler of ordinary people's lives and develops a new form of writing that will reveal just how interconnected the world is becoming.

The Turning Point transports us into the foggy streets of Dickens's London, closely following the twists and turns of a year that would come to define him and forever alter Britain's relationship with the world. Fully illustrated, and brimming with fascinating details about the larger-than-life man who wrote Bleak House, this is the closest look yet at one of the greatest literary personalities ever to have lived.

ROBERT DOUGLAS-FAIRHURST is a professor of English literature at the University of Oxford, and a fellow of Magdalen College. His books include Becoming Dickens: The Invention of a Novelist, which won the Duff Cooper Prize, and The Story of Alice: Lewis Carroll and the Secret History of Wonderland, which was short-listed for the Costa Biography Award and was a BBC Radio 4 Book of the Week. He writes regularly for publications including The Times (London), The Guardian, TLS, and The Spectator. Radio and television appearances include Start the Week and The Culture Show, and he has also acted as the historical consultant on TV adaptations of Jane Eyre, Emma, and Great Expectations, the BBC drama series Dickensian, and the feature film Enola Holmes. In 2015 he was elected a Fellow of the Royal Society of Literature. He lives in Oxford, England.

"With estimable research and prose as electric as a newly laid telegraph, Oxford English professor Douglas-Fairhurst presents this pivotal year in Dickens’ life as London’s sociopolitical machinations kindled in him a ‘growing sense of a serious social mission.’ . . . it bursts at the seams, ballooned by [Douglas-Fairhurst’s] passion for historical context.” —Kirkus Reviews

“Douglas-Fairhurst (Becoming Dickens) takes an unusual and entertaining approach to biography in this look at a single, monumental year in the life of Charles Dickens. By zeroing in on 1851, a year in which London was going through revolutions in ‘industry and transport’ and the year of the Great Exhibition, which showed England’s grandiose goals of ‘ushering in a new era of global harmony,” Douglas-Fairhurst aims to depict his subject with ‘something closer to the texture of ordinary experience.’ . . .  [He] brings Victorian England to vivid life, recounting Dickens’s commute through a smoke-drenched London and Prince Albert’s closing of the Great Exhibition in October, and makes a convincing case that the year was pivotal in the writer’s life. A ceaselessly surprising study of Dickens and the era in which he lived, this will be a treat for literature lovers.” —Publishers Weekly

"Robert Douglas-Fairhurst makes the case that this was the year that made Dickens. Boz could certainly bustle. We find him editing a journal, staging a play, co-writing a cookbook, walking 20 miles in a day and instructing fallen women in the virtues of truthfulness, industry, temperance and punctuality. A fascinating portrait of the author and his accelerating times." —The Times (UK)

"Douglas-Fairhurst’s… immersive book echoes the experimental form of the novel, blending stories, sub-plots and telling details to bring to life a complex moment in the life of a city and one of its greatest writers." —Carl Wilkinson, Financial Times

“It’s amazing how eruditely Robert Douglas-Fairhurst manages to illuminate our history through a microscopic focus on one brief period. The Turning Point transports us to 1851. The book’s principal subjects are Charles Dickens as he embarks on Bleak House, and the Crystal Palace, first assembled in all its sparkling glory for that year’s Great Exhibition.”  —Alan Johnson, New Statesman

“Robert Douglas-Fairhurst pulls off an extraordinary trick of immersive history, taking a single year in Charles Dickens’s life, 1851, and placing the personal story of one of the most extraordinary writers ever to have lived within his social and cultural context.”  —Lucasta Miller, Spectator

“Douglas-Fairhurst is a shrewd, amusing and original guide. . . . [he] gives you fascinating facts . . . [and] a brisk and brilliant analysis of Bleak House.” —Laura Freeman, The Times

“The Turning Point . . . builds incrementally towards Bleak House . . . [and] makes for a very satisfying finale. A manuscript page of the novel, dense with crossings-out of emendations, is reproduced as evidence of Dickens's painstaking process of creation. Robert Douglas-Fairhurst has taken pains of his own and this wonderfully entertaining book is the result.” —Observer

“This tremendous book dazzles and delights . . . it's full of discoveries. A glorious book; revealing and unravelling Charles Dickens before our very eyes, melding his life and his work, using scholarship, wit and passion—a triumph.” —Miriam Margolyes, BAFTA award-winning actress

“[The Turning Point] lingers on details and in doing so illuminates a very specific period of Dickens’s life. . . . The book is a fascinating biography that ultimately brings fresh insight to the life of Charles Dickens and his work as a novelist.” —The Spectator

“Like Shapiro, Douglas-Fairhurst explores a form of biography in which the life is not a discrete entity but deeply embedded in its dizzying, granular context. When that life is that of such an extraordinary individual as Dickens—whose mercurial energy made him such a complex actor in and commentator on those times—this approach is more than apt. . . . Douglas-Fairhurst uses a fascinating range of interconnected sources, side-plots and telling details to dramatize the complex social and imaginative web out of which it came. At the end, he offers no pat conclusion but a brilliant analysis of the famous opening of Bleak House, with its strange experimental syntax and portrayal of London in the fog. The jaunty subtitle of Douglas-Fairhurst’s book—A year that changed Dickens and the world—does not quite do justice to the sophistication and subtlety of his technique. He gives us history not as grand narrative or teleology but as total immersion and multiplicity. As such, he invites us to feel what it felt like to be Dickens in 1851.” —Financial Times

“Fascinating. . . . The book is full of nuggets. . . . Although the author focuses on just one year of the writer’s life, Charles Dickens comes over as a deeply complex character: warm, generous and compassionate yet also overbearing, pompous and selfish. . . . A splendidly enjoyable book.” —Daily Mail (UK)