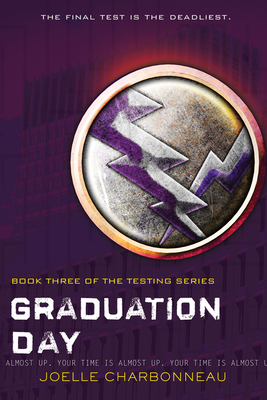 By Joelle Charbonneau
$17.99
Call for price

The powerful conclusion to the New York Times bestselling Testing trilogy. In a scarred and brutal future, the United Commonwealth teeters on the brink of all-out civil war. The rebel resistance plots against a government that rules with cruelty and cunning. Gifted student and Testing survivor Cia Vale vows to fight.

She wants to put an end to the Testing, but she can't do it alone.

This is the chance to lead that Cia has trained for—but who will follow? Plunging through layers of danger and deception, Cia must risk the lives of those she loves—and gamble on the loyalty of her lethal classmates.

Who can Cia trust?

The stakes are higher than ever—lives of promise cut short or fulfilled; a future ruled by fear or hope--in the electrifying conclusion to Joelle Charbonneau's epic Testing trilogy. Ready or not…it’s Graduation Day.

The final test is the deadliest.

“The Testing is a chilling and devious dystopian thriller that all fans of The Hunger Games will simply devour. Joelle Charbonneau writes with guts and nerve but also great compassion and heart. Highly recommended.”—Jonathan Maberry, New York Times bestselling author of Rot & Ruin and Flesh & Bone

The Testing trilogy is:

Joelle Charbonneau began telling stories as an opera singer, but these days she finds her voice through writing. She lives near Chicago with her husband and son, and when she isn’t writing, she works as an acting and vocal coach.
www.joellecharbonneau.com
Twitter @jcharbonneau
Instagram @joellejcharbonneau

"Charbonneau’s portrayal of a ravaged future America attempting to rebuild itself is gripping, filled with surprises and complicated questions of right versus wrong. As in the previous books, Charbonneau remains focused on philosophical worries and moral tests over spectacle and bloodshed, with multiple layers and twists to keep readers forever guessing." — Publishers Weekly

"Conspiracies, counterconspiracies, lies and double crosses: It's quite a ride." — Kirkus Reviews

"Charbonneau delivers nail-biting suspense that fans of the series have come to love." — Voice of Youth Advocates (VOYA)