Return of the Underwear Dragon (Hardcover) 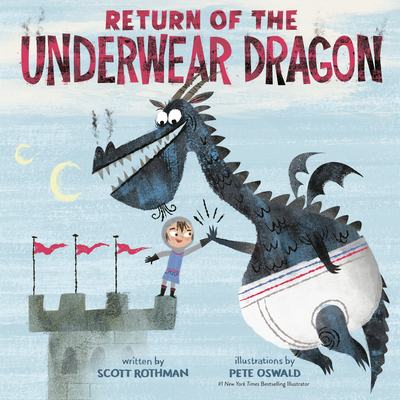 In this hilarious sequel to the popular picture book Attack of the Underwear Dragon, a brave young knight teaches his former sworn enemy, a dragon, to read. With playful illustrations from the #1 New York Times bestselling artist of The Bad Seed!

Once again, Sir Cole sets out on a valiant quest. This time it isn't to conquer the Underwear Dragon--it's to help him learn how to read. But it's hard to teach a fire-breathing creature to read an actual book because he sets them all on fire. And when the Underwear Dragon finally succeeds, Sir Cole presents his star pupil with the perfect gift--gigantic alphabet underwear!

SCOTT ROTHMAN is a writer of humor pieces and screenplays, including Draft Day and Army of One, both of which he co-wrote with Rajiv Joseph. Scott is a graduate of Colby College and received an MFA in dramatic writing from New York University's Tisch School of the Arts. His humor writing has appeared in various publications, including the New Yorker, GQ, and McSweeney's. He lives in Connecticut with his wife and three children.

PETE OSWALD is the New York Times bestselling illustrator of The Good Egg, as well as The Bad Seed. He has worked as a character designer, a concept artist, and an art director on many popular films, including Madagascar 2, Cloudy with a Chance of Meatballs, and Angry Birds.

"Rothman and Oswald’s delightful sequel rightly captures the thrills and vexations afflicting all new readers. Now it’s the Underwear Dragon’s turn in the spotlight, and shine he does. The stylized artwork, meanwhile, retains its ability to provoke laughs and sympathy in equal measure. Hooray for the Underwear Dragon!" --Kirkus Reviews

"Readers will likely take [the story] in stride, along with Rothman’s casually rhymed prose, for the entirely ridiculous sight of a dragon in underpants blundering clumsily through Oswald’s cartoon illustrations. Both the fundamental value of literacy and the old principle of getting the right book to the right reader, every librarian’s goal, shine as brightly as ever." --Booklist