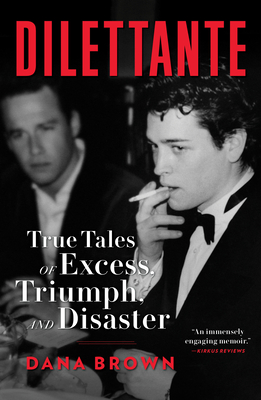 “Dilettante offers the best seat in the house into the workings of one of the great cultural institutions of our time.”—Buzz Bissinger, New York Times bestselling author of Friday Night Lights

Dana Brown was a twenty-one-year-old college dropout playing in punk bands and partying his way through downtown New York’s early-nineties milieu when he first encountered Graydon Carter, the legendary editor of Vanity Fair. After the two had a handful of brief interactions (mostly with Brown in the role of cater waiter at Carter’s famous cultural salons he hosted at his home), Carter saw what he believed to be Brown’s untapped potential, and on a whim, hired him as his assistant. Brown instantly became a trusted confidante and witness to all of the biggest parties, blowups, and takedowns. From inside the famed Vanity Fair Oscar parties to the emerging world of the tech elite, Brown’s job offered him access to some of the most exclusive gatherings and powerful people in the world, and the chance to learn in real time what exactly a magazine editor does—all while trying to stay sober enough from the required party scene attendance to get the job done. Against all odds, he rose up the ranks to eventually become the magazine’s deputy editor, spending a quarter century curating tastes at one of the most storied cultural shops ever assembled.

Dilettante reveals Brown’s most memorable moments from the halcyon days of the magazine business, explores his own journey as an unpedigreed outsider to established editor, and shares glimpses of some of the famous and infamous stories (and people) that tracked the magazine’s extraordinary run all keenly observed by Brown. He recounts tales from the trenches, including encounters with everyone from Anna Wintour, Lee Radziwill, and Condé Nast owner Si Newhouse, to Seth Rogen, Caitlyn Jenner, and acclaimed journalists Dominick Dunne and Christopher Hitchens.

Written with equal parts affection, cultural exploration, and nostalgia, Dilettante is a defining story within that most magical time and place in the culture of media. It is also a highly readable memoir that skillfully delivers a universal coming-of-age story about growing up and finding your place in the world.

Dana Brown is the former deputy editor of Vanity Fair, where he was responsible for hundreds of feature stories on topics ranging from geopolitics to business, pop culture to crime, and high-society scandal to the art world, a number of which were recognized by the National Magazine Awards. He has also written and developed films and television pilots for Miramax, Hulu, AMC, Imagine Entertainment, and CBS. He lives in New York City.

“Dilettante is a salute to an industry and its practitioners, those who were making a meaningful cultural contribution even while they were trying their damnedest to drain Condé Nast’s fathomless expense account.”—Shelf Awareness

“I got to work with Dana Brown when I was asked to edit Vanity Fair’s comedy issue. As I got to know him a bit, I kept thinking—Oh the things he’s seen! While Dana was too discreet to tell me the good stuff back then, I’m so glad he’s chosen to share it all now in this amazing, insightful, and funny memoir.”—Judd Apatow

“Dana Brown’s unlikely rise to deputy editor of Vanity Fair is a fairy tale. But if he started out as a dilettante, he became much more than that, shepherding culture-defining stories into the pages of America’s glossiest monthly. Impossible to put down, Dilettante is an irresistibly juicy memoir.”—Nancy Jo Sales, New York Times bestselling author of American Girls: Social Media and the Secret Lives of Teenagers

“In writing his story, Dana Brown has not only written about movie stars, power brokers, cocaine-fueled parties, alcohol-fueled parties, alcohol-fueled cocaine, New York at its zenith, New York in the morning (when it was shaky), New York in the evening (when it was riding high), Vanity Fair, Graydon Carter, the magazine industry when it was worth calling an industry, but also the story of Generation X, the second-greatest generation, which is the story of America’s last great good time. It’s a power ballad of a book. It’s ‘November Rain.’ I loved every single page.”—Rich Cohen, bestselling author of Tough Jews and Sweet and Low

“A scintillating memoir, elegantly written, witty, self-deprecating, observant, chronicling how a great magazine is put together, giving the intimate detail that provides a unique social history of two decades of New York and Hollywood.”—James Fox, bestselling author of White Mischief and co-writer of Life by Keith Richards

“An immensely engaging memoir and inside view of the magazine world . . . [Brown] offers grounded and insightful observations—not only about the internal workings at Vanity Fair, but also major shifts in a media world rapidly transitioning to digital platforms and up-to-the-moment information content alongside rapidly evolving American cultural tastes.”—Kirkus Reviews

“Dilettante is a coming-of-age story written with grace and humor and poignance. It is searingly honest without the typical suspects of snark and smirk. It is a window into a different place and time when the world of New York and magazine publishing gleamed with dazzle and glamour. Dana Brown splendidly reminds us of how much fun and serendipitous it all was.”—Buzz Bissinger, New York Times bestselling author of Friday Night Lights