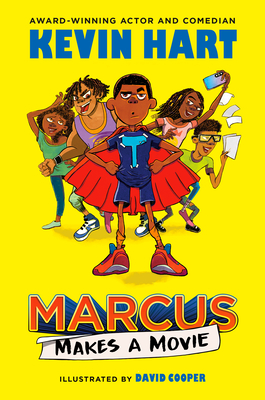 Marcus is NOT happy to be stuck in after-school film class . . . until he realizes he can turn the story of the cartoon superhero he’s been drawing for years into an actual MOVIE! There’s just one problem: he has no idea what he’s doing. So he’ll need help, from his friends, his teachers, Sierra, the strong-willed classmate with creative dreams of her own, even Tyrell, the local bully who’d be a perfect movie villain if he weren’t too terrifying to talk to.

Making this movie won’t be easy. But as Marcus discovers, nothing great ever is—and if you want your dream to come true, you’ve got to put in the hustle to make it happen.

Comedy superstar Kevin Hart teams up with award-winning author Geoff Rodkey and lauded illustrator David Cooper for a hilarious, illustrated, and inspiring story about bringing your creative goals to life and never giving up, even when nothing’s going your way.

Kevin Hart is an award-winning actor, a comedian, and a number one New York Times bestselling author. His films, including Fatherhood, Jumanji, Captain Underpants, and The Secret Life of Pets, have earned billions at the box office, and his stand-up comedy tours have sold out arenas and football stadiums, leading Forbes to name him the “king of comedy.” His first middle-grade novel, Marcus Makes a Movie, was an instant New York Times bestseller and published to great critical acclaim, with Kirkus Reviews praising it as “a charming read . . . that celebrates the gifts of authentic friendship” and Publishers Weekly calling it an “energetic love letter to the artistic process.” In the laugh-out-loud sequel, Marcus Makes It Big, Kevin delivers a heartfelt message about the perils of sudden fame and the importance of sticking close to the friends and family who helped get you there.

Kevin is also an entrepreneur, a television producer, and the chairman of the Laugh Out Loud Network and CEO of HartBeat Productions. He lives in Los Angeles with his family.
@KevinHart4real

"Authentic dialogue and the ups and downs of his journey keep kid readers on the edge of their seat..." –Parents

"A charming read that demystifies the work of making a movie and celebrates the gifts of authentic friendship.” –Kirkus Reviews

"With its solid comic time and realistic sense of character and dialogue, this energetic love letter to the artistic process provides both practicality and encouragement." –Publishers Weekly

"A glimpse of what working hard to make a dream a reality looks like." –Booklist

"Not only is it jam-packed with Hart’s signature humor, but it touches on important themes familiar to Hart, too: the hustle, never giving up and bringing your creative goals to life." -Variety