How to Write One Song: Loving the Things We Create and How They Love Us Back (Hardcover) 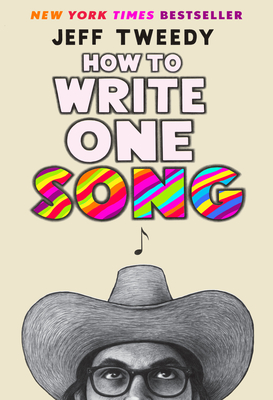 There are few creative acts more mysterious and magical than writing a song. But what if the goal wasn't so mysterious and was actually achievable for anyone who wants to experience more magic and creativity in their life? That's something that anyone will be inspired to do after reading Jeff Tweedy's How to Write One Song.

Why one song? Because the difference between one song and many songs isn't a cute semantic trick—it's an important distinction that can simplify a notoriously confusing art form. The idea of becoming a capital-S songwriter can seem daunting, but approached as a focused, self-contained event, the mystery and fear subsides, and songwriting becomes an exciting pursuit.

And then there is the energizing, nourishing creativity that can open up. How to Write One Song brings readers into the intimate process of writing one song—lyrics, music, and putting it all together—and accesses the deep sense of wonder that remains at the heart of this curious, yet incredibly fulfilling, artistic act. But it’s equally about the importance of making creativity part of your life every day, and of experiencing the hope, inspiration, and joy available to anyone who’s willing to get started.

As the founding member and leader of the Grammy Award–winning American rock band Wilco, and before that the cofounder of the alt‐country band Uncle Tupelo, Jeff Tweedy is one of contemporary music’s most accomplished songwriters, musicians, and performers. Jeff has released two solo albums, written original songs for eleven Wilco albums, and is the author of the New York Times bestseller Let's Go (So We Can Get Back): A Memoir of Recording and Discording with Wilco, Etc. He lives in Chicago with his family.

“[A] guide to rediscovering the joys of creating that we all felt as children … The main premise of Tweedy’s latest book is in the title, but many of his points could be applied equally to a variety of creative endeavors: namely, how to stop giving yourself excuses and start just doing the thing.”
—The New York Times

“[How to Write One Song] is one part manual for composing a song, and one part philosophical inquiry into the human desire—the human need—to create. It's also an easy, delightful read.”
—Esquire.com

"[A] generous and thoughtful argument for carving time out for creativity. [Tweedy] attempts to demystify songwriting, offering both encouragement and practical tips that from anyone else might read as self-help. But instead, Tweedy strikes a tone that’s more like that of an exuberant friend: You have to try this, man. And you’ll want to."
—Chicago Tribune

“How To Write One Song [is] a smart, funny, relentlessly practical guide to discovering the secret songwriter within.”
—GQ

"Jeff Tweedy is the perfect example of the consummate songwriter...Given his decades of success as an artist, the veteran musician has a lot of insight and advice to offer about writing a song. Offering tips and advice along the way, Tweedy guides readers on such things as starting a song and handling writer's block, a dreaded moment for any writer."
—Forbes

"In this succinct guide, the Wilco (and before that, Uncle Tupelo) frontman walks you through pretty much every question you might have about writing a song of your own. From anxiety that you’ll suck—you totally will, at first—to the fear of exposing your inner feelings—accept it, writing songs means getting vulnerable—Tweedy helps you get out of your head and in front of your notebook or voice recorder.  We found ourselves highlighting and adding bookmarks."
—Apple (Best Books of October)

"In four carefully crafted sections, renowned songwriter, musician, and performer Tweedy explains the mysteries of the 'ephemeral' process of a writing a song, from inspiration to process, suppressing one's annoying ego, and disappearing in the work .... Observing Tweedy's glowingly creative mind at work throughout this seriously fun book is truly illuminating.”
—Booklist