Waxing On: The Karate Kid and Me (Hardcover) 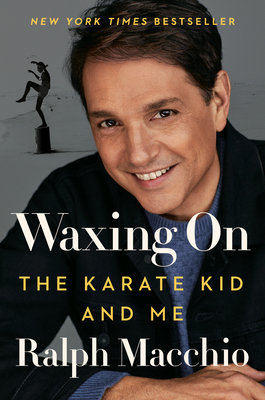 Since The Karate Kid first crane-kicked its way into the pop culture stratosphere in June 1984, there hasn’t been a week Ralph Macchio hasn’t heard friendly shouts of “Wax on, wax off” or “Sweep the leg!” Now, with Macchio reprising his role as Daniel LaRusso in the #1 ranked Netflix show Cobra Kai, he is finally ready to look back at this classic movie and give the fans something they’ve long craved.

The book will be Ralph Macchio’s celebratory reflection on the legacy of The Karate Kid in film, pop culture, and his own life. It will be a comprehensive look at a film that shaped him as much as it influenced the world. Macchio will share an insider's perspective of the untold story behind his starring role—the innocence of the early days, the audition process, and the filmmaking experience--as well as take readers through the birth of some of the film’s most iconic moments.

Ultimately, the book centers on the film itself, focusing on the reason that the characters and themes have endured in such a powerful way and how these personal experiences have impacted Macchio's life. It will bring readers back to the day they met Daniel LaRusso and Mr. Miyagi for the first time, but will also provide a fascinating lens into how our pasts shape all of us and how the past can come back to enrich one's life in surprising and wonderful ways.

An actor, producer, director with an extensive list of credits, Ralph Macchio is best known for his celebrated performance as Johnny in Frances Ford Coppola’s The Outsiders; the hit film My Cousin Vinny; and most notably for the title role in the popular classic The Karate Kid and its successors. Expanding further on the Karate Kid Universe, Ralph continues to reprise his iconic role of Daniel LaRusso in the hit Netflix series Cobra Kai. He lives on Long Island with his family.

“[Macchio’s] down-to-earth writing style suits the behind-the-scenes tales and his heartwarming meetings with fans well… Macchio’s sweet, nostalgic memoir is as family-friendly and instructive as its inspiration.” —Kirkus

“Macchio, star of 1984’s The Karate Kid, produces another feel-good hit with this breezy reflection on his experience making the movie…Macchio writes, ‘The film is a prime example of when Hollywood gets it all right. It teaches and inspires through pure entertainment.’ Fans will find this just as entertaining.”—Publishers Weekly

"Waxing On is a refreshing look into a film that touched our hearts and an era that defined so many of us. Through honest and witty reflection, the reader is plunged back into the unforgettable world of The Karate Kid, and the magic that happens when Hollywood is on point. Macchio shares his unique perspective with humor and humility as well as with surprising relatability. I was a fan before, but now I feel like a friend." —Brooke Shields, New York Times bestselling author of There Was a Little Girl

"I love my fellow “Greaser’, Ralph. But if I’m being completely honest, I’ve never gotten over the existential pain of The Karate Kid’s ongoing success and relevance. What does that movie have that Youngblood doesn’t?! Well, after reading Ralph’s fun and insightful recounting, I now totally get it. Long live The Karate Kid!" —Rob Lowe, New York Times bestselling author of Stories I Only Tell My Friends

"A breezy read that disproves the clanky, "Nice guys finish last,' cliche, but re-defines it as, 'Nice guys LAST.' This memoir will put you in the BEST mood, I promise." —Patton Oswalt, New York Times bestselling author of Silver Screen Fiend

"Ralph Macchio is ready to send the secrets of “The Karate Kid” to the mat once and for all."
—New York Post

"A loving tribute to an underdog story that still resonates, generation after generation." —Salon

"Macchio covers all things Karate Kid, serving up behind-the-scenes dish about the making of the film, warm remembrances of those he’s lost...and lessons learned from a life in the public eye."
—Hollywood Reporter