The Emergency: A Year of Healing and Heartbreak in a Chicago ER (Hardcover) 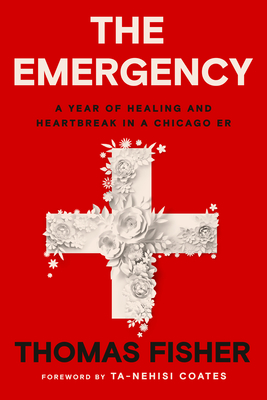 The riveting, pulse-pounding story of a year in the life of an emergency room doctor trying to steer his patients and colleagues through a crushing pandemic and a violent summer, amidst a healthcare system that seems determined to leave them behind

“Gripping . . . eloquent . . . This book reminds us how permanently interesting our bodies are, especially when they go wrong.”—The New York Times

ONE OF THE BEST BOOKS OF THE YEAR: Time

As an emergency room doctor working on the rapid evaluation unit, Dr. Thomas Fisher has about three minutes to spend with the patients who come into the South Side of Chicago ward where he works before directing them to the next stage of their care. Bleeding: three minutes. Untreated wound that becomes life-threatening: three minutes. Kidney failure: three minutes. He examines his patients inside and out, touches their bodies, comforts and consoles them, and holds their hands on what is often the worst day of their lives. Like them, he grew up on the South Side; this is his community and he grinds day in and day out to heal them.

Through twenty years of clinical practice, time as a White House fellow, and work as a healthcare entrepreneur, Dr. Fisher has seen firsthand how our country’s healthcare system can reflect the worst of society: treating the poor as expendable in order to provide top-notch care to a few. In The Emergency, Fisher brings us through his shift, as he works with limited time and resources to treat incoming patients. And when he goes home, he remains haunted by what he sees throughout his day. The brutal wait times, the disconnect between hospital executives and policymakers and the people they're supposed to serve, and the inaccessible solutions that could help his patients. To cope with the relentless onslaught exacerbated by the pandemic, Fisher begins writing letters to patients and colleagues—letters he will never send—explaining it all to them as best he can.

As fast-paced as an ER shift, The Emergency has all the elements that make doctors’ stories so compelling—the high stakes, the fascinating science and practice of medicine, the deep and fraught interactions between patients and doctors, the persistent contemplation of mortality. And, with the rare dual perspective of somebody who also has his hands deep in policy work, Fisher connects these human stories to the sometimes-cruel machinery of care. Beautifully written, vulnerable and deeply empathetic, The Emergency is a call for reform that offers a fresh vision of health care as a foundation of social justice.

Thomas Fisher is a board-certified emergency medicine physician from Chicago. He has worked to improve health care as an academic, health insurance executive, and White House Fellow in the Obama administration. His path includes training as Robert Wood Johnson Foundation Clinical Scholar, being honored as a Crain’s Chicago Business 40 under 40, and inclusion in the Aspen Institute’s Health Innovators Fellowship. He is an epicure and a runner, and for the past twenty years he has worked in the emergency department at the University of Chicago, serving the same South Side community where he was raised.

“This book reminds us how permanently interesting our bodies are, especially when they go wrong. Fisher’s account of his days is gripping. . . . His frustration, his outraged intelligence, is palpable on every page. . . . the best account I’ve read about working in a busy hospital during Covid.” —The New York Times

“A briskly paced, heartfelt, often harrowing year in the life of an ER doctor on Chicago’s historically Black South Side.” —San Francisco Chronicle

“The Emergency is graphic and gut-wrenching, as it should be. It is an undeniable call for a just health-care system, as it will be.”—Ibram X. Kendi, author of How to Be an Antiracist

“With scalpel-like precision and searing patient stories, Thomas Fisher exposes the battlefield of medicine and the scarring—and often fatal—wounds of inequality. The Emergency is a bat call. Health care doesn’t care, inequality kills, and we must do better.”—Dr. Mona Hanna-Attisha, author of What the Eyes Don’t See

“The Emergency is a doctor’s-eye view of the layered crises afflicting a single Chicago community and the entire nation that surrounds it. By turns brutal and beautiful, this is a tale of life, death, and the people whose efforts often determine which of those two will prevail.”—Jelani Cobb, co-editor of The Matter of Black Lives

“Tired of reading about COVID-19? Don’t make the mistake of missing the best book about it to date. The Emergency is Thomas Fisher’s memoir of the first year of the pandemic’s grip on Chicago’s South Side, where he grew up and where he battled the disease, along with every other ailment and injury that reached his emergency room. This is no past-tense memoir but a gripping account of events as they happen. It’s beautifully rendered in the present tense and leavened by a series of letters he composed to, and in honor of, his patients. But this is also a book about our country, a wrenching and tender reflection on an aphorism Fisher invokes: When America catches a cold, black America catches pneumonia. It won’t take you long to read this fast-paced account, but you won’t forget it anytime soon.”—Paul Farmer, M.D., author of Pathologies of Power: Health, Human Rights, and the New War on the Poor

“Riveting . . . [Fisher] eloquently captures the intensity of the situation . . . and shares heartrending stories of victims. . . . The result is a powerful reckoning with racial injustice and a moving portrait of everyday heroism.”—Publishers Weekly (starred review)