The Summer Friend: A Memoir (Hardcover) 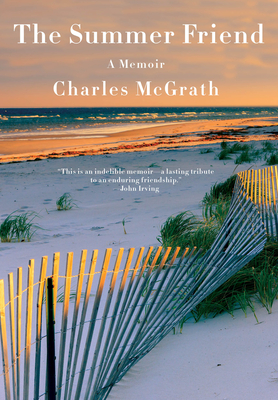 Alive with the intoxicating magic of summer in New England, former editor of the New York Times Book Review Charles McGrath’s evocative memoir looks back at that sun-soaked season, at family, youth, and a singular bond made at a time when he thought he was beyond making friends.

“To read Chip McGrath’s gentle, elegant memoir … is to lose yourself in your own past summers, especially the ones of your youth, when you imagined there’d be an infinite number of them, and also friends to share those summers with. That both turn out to be numbered makes this book positively ache with beauty and loss.” —Richard Russo


It was early evening and a new acquaintance had come to retrieve his daughter from a play date. Instead of driving up in a minivan, he arrived by water, tacking his sailboat smartly across a squiggly channel in the marsh, throwing a rope overboard, and zipping back home, his gleeful daughter riding in the wake. Who knew you could do such a thing? And how could you resist befriending a man such as that?

Over the course of this rich memoir, McGrath recalls with a gimlet eye the pleasures of summers past: amateur lobstering, 9-hole golf, family costume charades, bridge-jumping, and a friendship forged between two men from different backgrounds who came together late in life.

Recounting the vagaries of summer with such precision and warmth-- peeling long strips of sunburnt skin from your shoulder as if “shuffling off your own cocoon,” the outdoor shower curtain blowing open in the breeze, an M80 firework in the mailbox--The Summer Friend is simultaneously a potent evocation of the rhythms and rituals of summer and a stirring remembrance of a friend found and then lost.

Charles McGrath, known as Chip, is the former deputy editor of The New Yorker and a former editor of The New York Times Book Review, and is currently a contributing writer at The Times. He is the editor of Golf Stories, two Library of America volumes, and an occasional contributor to Golf Digest. He lives with his wife in northern New Jersey and southeastern Massachusetts.

“Sun-drenched and deeply touching...I loved McGrath’s snapshots of the dilapidated nine-hole courses he likes to play on, which he describes with a deadpan relish reminiscent of Bill Bryson… McGrath eulogizes his summer friend in the very first chapter, then brings him to life on the subsequent pages with such vividness and palpable affection that the reader forgets his fate for long stretches ... When the end finally comes, in a chapter simply called ‘Dying,’ it lands like a gut punch…. McGrath’s book is an act of love, a fitting tribute to his old friend and a poignant reminder to all of us to squeeze every last drop out of the summers that remain.”
—Tom Perrotta, The New York Times

"[An] affecting memoir...The book’s prevailing spirit is wholly life-affirming. It is in the fullness with which things large and small are rendered...in all their humorous specificity that makes memorable what might be called the moral of the tale—that “summer can happen almost anywhere.”
—William H. Pritchard, The Wall Street Journal

“[An] ode to friendship and nostalgia...McGrath's memoir is as much about his childhood summers as it is about his summers as a grown-up, and he moves back and forth seamlessly between second person...and first person. That shift keeps the tone intimate but not overwhelmingly self-centered. These things I'm writing about, McGrath seems to say, are things we all understand... The poignancy of the final chapters is genuinely touching. Anyone who has lost a friend will understand.”
—Laurie Hertzel, Star Tribune

“A heartfelt, guarded ode to a seasonal pal…This memoir is pitch-perfect for outdoorsy dads, sons, brothers, uncles, nephews, and the like… McGrath reaches inside himself and writes a letter, saying for the first time how much [his] bond [with Chip] has meant: ‘I wrote down things I had been wanting to say for years…it was too late. And possibly I said too little. This book is what I should have given him.’ Yes, it’s too late for the summer friend, but certainly not for readers.”
—Kitty Kelley, Washington Independent Review of Books

“McGrath…combines nostalgia and melancholy in this ode to summer and friendship…McGrath revels in the ‘syrupy slowness' of summer, a time beyond time…That changes dramatically, though, after McGrath meets Chip Gillespie…An architect with the impish soul of Tom Sawyer, Chip schools his new friend in the art of summertime fun for adults…Pursuits like sailing and golf…are enjoyed in a refreshingly off-kilter manner (sailing small wooden boats, playing on rundown nine-hole golf courses). There’s plenty of time, too, for firework follies, lobster-­trapping fiascoes, and a chaotic form of dumpster diving. The fun, inevitably, is curtailed by mortality, but just as McGrath evokes summer pleasures with self-deprecating wit and without sloppy sentiment, he steers a course well away from the maudlin in recounting Chip’s death from cancer.” ‘
—Bill Ott, Booklist

“To read Chip McGrath’s gentle, elegant memoir The Summer Friend, is to lose yourself in your own past summers, especially the ones of your youth, when you imagined there’d be an infinite number of them, and also friends to share those summers with.  That both turn out to be numbered makes this book positively ache with beauty and loss.”
—Richard Russo

“The main character of this unusual memoir isn’t the author; the hero of this story is the author’s best friend, a cancer victim.  I love the novelistic details—cancer is imagined as a monster who comes back, as nightmares do. This is an indelible memoir —a lasting tribute to an enduring friendship.”
—John Irving

“How can anyone write so pretty without even seeming to try? You don't so much read this memoir as you just seem to draw it in, breathe it in, with all the smells and tastes of summer, and friendship, and being young ... beautifully young. In these pages, without there seeming to be a wasted word, we sail a Beetle named Loon and go to sleep in a summer house without one level floor. We learn how smashing glass at a town dump can set you free, and why it is more satisfying, sometimes, to buy your fireworks from an Italian who is packing heat.”
—Rick Bragg

“A long friendship stirs a meditation on summertime in this tender elegy… McGrath’s prose unspools like a long summer day, full of excursions that set out in vague directions and arrive at delightful places brimming with exuberant sensations… Through his glowing, retrospective lens, McGrath captures life at its most carefree and meaningful.”
–Publishers Weekly, starred

“In his debut memoir, McGrath, a former editor of the New York Times Book Review and former deputy editor of the New Yorker, wistfully reflects on New England vacations... The author recalls the thrill of bridge-jumping into water 30 feet down; making fireworks runs and setting them off on the 4th of July; and ‘messing about in boats’ of all kinds... The narrative takes on a bittersweet character when the author finds out that his 57-year-old friend has prostate cancer… A warmhearted memoir imbued with a comfortable, old-fashioned, sweet ambience.”
—Kirkus