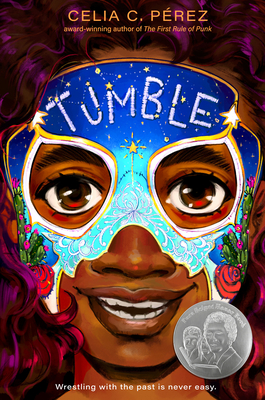 From the award-winning author of The First Rule of Punk and Strange Birds, a dazzling novel about a young girl who collects the missing pieces of her origin story from the family of legendary luchadores she’s never met.

Twelve-year-old Adela “Addie” Ramírez has a big decision to make when her stepfather proposes adoption. Addie loves Alex, the only father figure she’s ever known, but with a new half brother due in a few months and a big school theater performance on her mind, everything suddenly feels like it’s moving too fast. She has a million questions, and the first is about the young man in the photo she found hidden away in her mother’s things.

Addie’s sleuthing takes her to a New Mexico ranch, and her world expands to include the legendary Bravos: Rosie and Pancho, her paternal grandparents and former professional wrestlers; Eva and Maggie, her older identical twin cousins who love to spar in and out of the ring; Uncle Mateo, whose lucha couture and advice are unmatched; and Manny, her biological father, who’s in the midst of a career comeback. As luchadores, the Bravos’s legacy is strong. But being part of a family is so much harder—it’s about showing up, taking off your mask, and working through challenges together.

Celia C. Pérez is the author of the award-winning and critically acclaimed books The First Rule of Punk and Strange Birds: A Field Guide to Ruffling Feathers. She lives in Chicago with her family, where in addition to writing books about lovable weirdos and outsiders, she works as a librarian. When she was in middle school, she filled diaries with recaps of televised wrestling matches. Visit her at celiacperez.com.

★ "Adela loves mythology and draws parallels from it to wrestling’s celebrity allure and peripatetic lifestyle...It all acts as an engaging backdrop to this story of family lost and found and of making amends."
—The Horn Book, starred review

★ “Tumble is a complex, emotional story about loss, self-discovery and belonging, about forgetting who you were and remembering who you are.”
—BookPage, starred review

“Strange Birds is an inspiring story about the power of truth, and of true friends.”
—Rebecca Stead, New York Times bestselling author of the Newbery Medal winner When You Reach Me

★ "Perfect for preteens becoming aware that friendships can be complicated, and that the world is more so.”
—The Horn Book (starred review)

★ “A rowdy reminder that people are at their best when they aren’t forced into neat, tidy boxes.”
—Publishers Weekly (starred review)