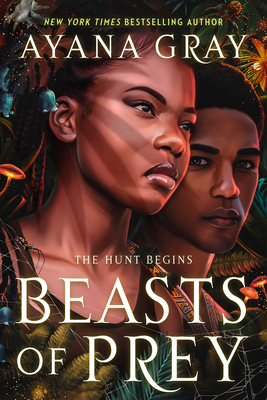 “Ayana Gray creates an amazing fantastical world with things that are both wondrous and monstrous. Told from three points of view that come together beautifully, this book is an immersive experience.”
— Revati Kilaparti, Old Firehouse Books, Fort Collins, CO

In this blockbuster fantasy series, perfect for fans of Firekeeper’s Daughter and Iron Widow, fate binds two Black teenagers together as they journey into a magical jungle to hunt down a vicious monster.

“Rich in magic and mythos, Beasts of Prey is a feast for all the senses.” —Renée Ahdieh, New York Times bestselling author of The Beautiful

There’s no such thing as magic in the broken city of Lkossa, especially for sixteen-year-old Koffi, who indentured to the notorious Night Zoo, knows the fearsome creatures in her care and paying off her family's debts to secure their eventual freedom can be her only focus. But the night those she loves are gravely threatened by the Zoo’s cruel master, Koffi unleashes a power she doesn’t fully understand, upending her life completely.

As the second son of a decorated hero, Ekon is all but destined to become a Son of the Six—an elite warrior—and uphold a family legacy. But on the night of his final rite of passage, Ekon encounters not only the Shetani—a vicious monster that has plagued the city for nearly a century and stalks his nightmares—but Koffi who seems to have the power to ward off the beast. Koffi’s power ultimately saves Ekon, but his choice to let her flee dooms his hopes of becoming a warrior.

Desperate to redeem himself, Ekon vows to hunt the Shetani and end its reign of terror, but he can’t do it alone. Koffi and Ekon form a tentative alliance and together enter the Greater Jungle, a world steeped in wild, frightening magic and untold dangers. The hunt begins. But it quickly becomes unclear whether they are the hunters or the hunted.

“The hunt for your next YA fantasy book trilogy obsession has ended.” —Entertainment Weekly

Ayana Gray is a New York Times bestselling young adult fantasy author and a lover of all things monsters, mythos, and magic. Originally from Atlanta, Georgia, she now lives in Little Rock, Arkansas, where she reads avidly, follows Formula One racing, and worries over the varying moods of her adopted baby black rhino, Apollo, and her mini goldendoodle, Dolly. Her debut novel, Beasts of Prey, is being adapted for feature film.

"The hunt for your next YA fantasy book trilogy obsession has ended." —Entertainment Weekly

“A propulsive mystery mixed with a moving coming-of-age tale and a touch of romance, Beasts of Prey asks: When we go into the jungle, who will we be when we come out?” —The New York Times Book Review

“Step into the lush, magical jungles of your new young-adult fantasy obsession. . . Much more than just your standard hero’s journey, Beasts of Prey is a story of courage, friendship, and community that’s as inspiring as it is exciting.” —Apple Books Review

★ “This pan-African story, rife with betrayal and narrated through poetic language that evokes vivid imagery, will ensnare readers, keeping them engaged with its energetic pace. The beautiful blend of mythology, romance, and action ends with a hint at more to come… A dazzling debut.” —Kirkus Reviews, starred review

★ “Gray's debut is a thrilling series opener with twists and turns that will delight. Hints about more expansive world building to come will entice readers to pick up future volumes in this must-buy for fantasy enthusiasts.” —Booklist, starred review

★ “With its memorable characters, and a lush, expansive world, Gray’s debut is an action-packed adventure that will tug at hearts and keep teens glued to the page, yearning for more. Essential for all collections.” —School Library Journal, starred review

“Rich in magic and mythos, Beasts of Prey is a feast for all the senses. Prepare to be transported to Koffi’s world from the first page and find yourself lost not only in the dark thrill of the hunt but the poignant beats of emotion at the heart of this story. Gray’s writing is lyrical, her imagery vivid. I eagerly await whatever she pens next.” —Renée Ahdieh, New York Times bestselling author of The Beautiful

“A fast-paced, rip-roaring ride that grabs you by the throat and never lets you go. A masterpiece of magic.” —Namina Forna, New York Times bestselling author of The Gilded Ones

“Epic doesn’t begin to encompass the jolting twists, sparkling mythos, and magical quests that fill the pages of Beasts of Prey. This is the sort of read that’s beyond transportive; it’s downright transcending—a tale full of heart and magic, and sure to ensorcell readers' body, bone, and soul.” —Roshani Chokshi, New York Times bestselling author of The Gilded Wolves

“In this wildly original debut, Gray marries the lush imaginative wonder of African mythology with an action-packed tale of two teens on the opposite ends of fate, figuring out what’s truly worth fighting for. Swoony, twisty, action-packed, Beasts of Prey is as epic as it is unforgettable.” —J. Elle, New York Times bestselling author of Wings of Ebony

"A delight. I rarely fall in love with characters as quickly as I did with Koffi and Ekon. Gray masterfully balances the wonder and uncertainty of youth with a deftly, fully imagined world that I was dying to learn more about." —S. A. Chakraborty, author of the critically acclaimed and internationally bestselling The Daevabad Trilogy

"Ayana Gray’s wonder-filled world of mythos and monsters and magic comes to life in the ensnaring, enchanting Greater Jungle. An unputdownable tale that unfolds in a maze of twists and turns, driven by the crackling wit of two protagonists on a quest to vanquish the beasts of their present and past.” —Amélie Wen Zhao, author of the Blood Heir trilogy

“A magical, bingeable debut by a phenomenal new voice in YA. Beasts of Prey is an immersive and heartfelt book with characters whose personalities seep from the pages. From its beautiful prose to its rich and vibrant world, this book is your next favorite read.” —Adalyn Grace, New York Times bestselling author of All the Stars and Teeth

"Steeped in rich worldbuilding and resonating with keenly drawn emotional depth, Beasts of Prey features masterful twists, heart-pounding action, and unforgettable characters you will want to follow to the end of the world and back. I grew lost in this book from the very first page." —Margaret Rogerson, bestselling author of Sorcery of Thorns

“Gray’s pan-African fantasy is filled with monsters, mythos, and Black girl magic. Her characters are well developed, and the plot is filled with African lore, expanded upon in an extensive author’s note. Fans of Forna’s The Gilded Ones and Ifueko’s Raybearer will enjoy this engrossing debut novel.” —The Horn Book

“One of the hottest young-adult books . . . It’s a thrill-packed premise that Gray elevates with crisp prose, surefooted pacing, and detail-rich worldbuilding. She weaves the markers of daily life, history and culture into scenes that crackle, painting her characters’ existence for her readers as clearly as she depicts physical action and emotional depth. It’s undeniably powerful storytelling.” —Book & Film Globe

“A great quest full of blood and betrayal.” —Tor.com