Justice on the Brink: A Requiem for the Supreme Court (Paperback) 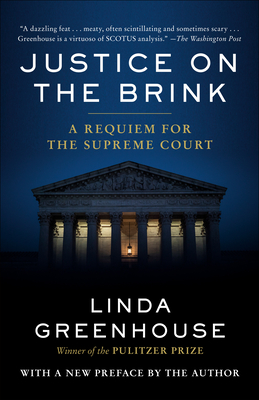 The gripping story of the Supreme Court’s transformation from a measured institution of law and justice into a highly politicized body dominated by a right-wing supermajority, told through the dramatic lens of its most transformative year, by the Pulitzer Prize–winning law columnist for The New York Times—with a new preface by the author

In Justice on the Brink, legendary journalist Linda Greenhouse gives us unique insight into a court under stress, providing the context and brilliant analysis readers of her work in The New York Times have come to expect. In a page-turning narrative, she recounts the twelve months when the court turned its back on its legacy and traditions, abandoning any effort to stay above and separate from politics. With remarkable clarity and deep institutional knowledge, Greenhouse shows the seeds being planted for the court’s eventual overturning of Roe v. Wade, expansion of access to guns, and unprecedented elevation of religious rights in American society. Both a chronicle and a requiem, Justice on the Brink depicts the struggle for the soul of the Supreme Court, and points to the future that awaits all of us.

Linda Greenhouse has reported on and written about the Supreme Court for The New York Times for more than four decades, earning numerous accolades, including a Pulitzer Prize. She currently writes an opinion column on the court and teaches at Yale Law School. She lives in New Haven, Connecticut, and Stockbridge, Massachusetts.

“Linda Greenhouse is a kind of Gibbon of the Supreme Court, a chronicler of such perception and such depth that it is difficult to imagine how we could understand this vital and opaque institution without her. As Americans, we are nearly overwhelmed by coverage of the presidency and of the Congress, but the court remains stubbornly elusive—except to Greenhouse. This landmark new book gives us an invaluable perspective on the Supreme Court in democracy’s hour of maximum danger.”—Jon Meacham, winner of the Pulitzer Prize

“Linda Greenhouse has written what is, hands down, the best book about the Supreme Court, its inner dynamics, and its place in the nation’s political and social life at least since Alexander Bickel’s classic, The Least Dangerous Branch, written in 1962. Choosing this pivotal moment in the flow of America’s history to open a revealing window into the history and workings of our highest court and a peek into its future and our own was a stroke of genius. Her account of the court from the death of Ruth Ginsburg to the rise of Amy Barrett moves at the pace of a thriller and teaches more about the court as an institution and the law as a discipline than any book of its length has any right to do.”—Laurence H. Tribe, Carl M. Loeb University Professor and Professor of Constitutional Law Emeritus, Harvard Law School

“Linda Greenhouse’s surpassing ability to decode the Supreme Court and consummate storytelling illuminate a truly watershed year. This is the book to read and reread for anyone wanting to understand what lies behind this pivotal time for American law and the legitimacy of American institutions.”—Martha Minow, 300th Anniversary University Professor, Harvard University, and former dean, Harvard Law School

“Linda Greenhouse, one of America’s most astute writers about the Supreme Court, has written a remarkable book: a month-by-month narrative of Amy Coney Barrett’s first year on the court that combines a riveting account of the legal arguments in pathbreaking cases―including cases involving religion, abortion, voting rights, and affirmative action―with compelling insights about how each of the nine justices resolved them. Justice on the Brink is invaluable for all citizens who want to understand the future of the court and the Constitution.”—Jeffrey Rosen, president and chief executive officer, National Constitution Center

“A revelatory study of the Supreme Court in flux.”—Publishers Weekly