An Honest Living: A Novel (Hardcover) 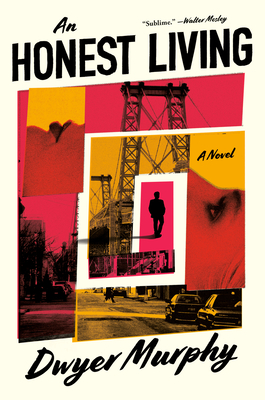 “Like the best noir practitioners, Murphy uses the mystery as scaffolding to assemble a world of fallen dreams and doom-bitten characters . . . Murphy’s hard-boiled rendering of the city is nothing short of exquisite . . . For anyone who wants a portrait of this New York, few recent books have conjured it so vividly.” —The New York Times Book Review, Editors’ Choice

A sharp and stylish debut from the editor-in-chief of CrimeReads in which an unwitting private eye gets caught up in a crime of obsession between a reclusive literary superstar and her bookseller husband, paying homage to the noir genre just as smartly as it reinvents it

After leaving behind the comforts and the shackles of a prestigious law firm, a restless attorney makes ends meet in mid-2000s Brooklyn by picking up odd jobs from a colorful assortment of clients. When a mysterious woman named Anna Reddick turns up at his apartment with ten thousand dollars in cash and asks him to track down her missing husband Newton, an antiquarian bookseller who she believes has been pilfering rare true crime volumes from her collection, he trusts it will be a quick and easy case. But when the real Anna Reddick—a magnetic but unpredictable literary prodigy—lands on his doorstep with a few bones to pick, he finds himself out of his depth, drawn into a series of deceptions involving Joseph Conrad novels, unscrupulous booksellers, aspiring flâneurs, and seedy real estate developers.

Set against the backdrop of New York at the tail end of the analog era and immersed in the worlds of literature and bookselling, An Honest Living is a gripping story of artistic ambition, obsession, and the small crimes we commit against one another every day.

Dwyer Murphy is a New York-based writer and editor. He is the editor-in-chief of CrimeReads, Literary Hub's crime fiction vertical and the world's most popular destination for thriller readers. He practiced law at Debevoise & Plimpton in New York City, where he was a litigator, and served as editor of the Columbia Law Review. He was previously an Emerging Writer Fellow at the Center for Fiction. His writing has appeared in The Common, Rolling Stone, Guernica, The Paris Review Daily, Electric Literature, and other publications.

“It is precisely style and atmosphere that give An Honest Living so much electricity and dimension. Like the best noir practitioners, Murphy uses the mystery as scaffolding to assemble a world of fallen dreams and doom bitten characters . . . Murphy’s hard-boiled rendering of the city is nothing short of exquisite . . . For anyone who wants a portrait of this New York, few recent books have conjured it so vividly. For those who demand a straightforward mystery without any humor, romance and ambience, well, forget it, Jake, it’s literature.” —The New York Times Book Review, Editors’ Choice

“Set amid New York’s rare-book trade, this slow-burning début crime novel is also an atmospheric homage to the film Chinatown.”
—The New Yorker

"[Murphy] knows not just where the bodies are buried but how readers want them to be discovered."
—Boston Globe

“This territory-marking debut is seductively steeped in motifs reminiscent of the golden age of noir. Fans of the genre will likely be nodding appreciatively from the introduction of a mysterious woman out to get her husband, which launches this story, to the concluding shot of a vintage car.”
—Shelf Awareness

“Quietly brilliant . . . The novel explores the ways in which we're nothing without our curiosities—even if those curiosities, in the end, undo us.”
—Los Angeles Review of Books


“An Honest Living is a novel about ambition and obsession, shadow and light, smoke and mirrors—a shimmering, often surprising, exploration of how fact and fiction reflect one another until the boundaries disappear.”
—BookTrib

“If Cara Black’s Aimee Leduc smoked pot, or if Michael Connelly was from Paris, their books might read a little something like Dwyer Murphy’s absurdly entertaining and extremely literary debut.”
—CrimeReads, “Most Anticipated Crime Books of 2022”

“An Honest Living hits all the right notes . . . [a] smart and seductive page-turner.”
—Fine Books & Collections

“For those who covet ‘reading in a bar with lousy lighting and good air conditioning,’ this one is pure pleasure.”
—Booklist

“An Honest Living is a smartly updated literary noir set in pre-financial crisis Manhattan; it’s suffused not only with risk-taking and critical thinking, but with Murphy’s generosity of spirit. The novel is playful and welcoming, coaching the reader to think the best of its cast of oddballs and misfits.”
—Study Hall

“An impressive debut noir from the CrimeReads website’s editor in chief . . . Murphy’s writing is smart, ruminative, and referential . . . [A] lovingly rendered snapshot of an already-bygone city, with details reeking of authenticity, down to the last barstool.”
—Library Journal

“A bittersweet love letter to New York and times gone by . . . fans of noir fiction will feel right at home.”
—Kirkus Reviews

“Murphy, the editor-in-chief of CrimeReads, writes with authority about the New York book world and literary references abound, from Edith Wharton to Cormac McCarthy . . .”
—Publishers Weekly

“Dwyer Murphy’s debut novel, An Honest Living, is a noir love letter to New York City. It is a sublime trip through a city teeming with professional idlers, hustlers, poets, politicians, insurance scammers, and real estate developers, all vying for their share of New York’s divinity.”
—Walter Mosley, author of Blood Grove

“An Honest Living is an electrically good time meted out in fine, sharp, crackling prose that somehow manages to be an homage, a send-up, and a reinvention all at once.”
—Téa Obreht, author of The Tiger’s Wife and Inland

“A witty, observant debut that’s as much a love letter to New York as it is a slick noir.”
—Andrea Bartz, author of We Were Never Here

“Dwyer Murphy’s An Honest Living is a deliciously smart PI novel set in New York’s antiquarian book world that channels Chandler and Chinatown to take us into a recent past that already feels like a bygone era. A brisk, funny, and fabulous debut.”
—Adrian McKinty, author of The Island

“Dwyer Murphy’s An Honest Living is the lawyer-book-collector noir you never knew you craved. Evocative and suspenseful, the book hums along in an unusual space somewhere in the constellation of Roberto Bolaño, Julio Cortázar, and the Coen Brothers—an ontological puzzle nested inside a shaggy dog story, or the reverse.”
—Jonathan Lethem, author of Motherless Brooklyn

“A terrific book.”
—Don Winslow, author of City on Fire

“Dwyer Murphy beautifully intertwines a noir mystery with the lore of New York. A captivating, beguiling novel right up to its shocking conclusion.”
—Samantha Downing, author of My Lovely Wife

“An Honest Living feels like an instant classic—a polished gem of a PI novel that’s wonderfully atmospheric and full of wit. Fast-paced as this book is, it’s also a smart read you’ll want to savor.”
—Alison Gaylin, author of The Collective

“An Honest Living is a sublimely literate, literary, and crafty novel—an homage to PI fiction that transcends the genre with style and inspiration to spare. Lovers of crime fiction and lovers of books of all types (as well as those of us who miss the old Brooklyn) will be equally transported.”
—Ivy Pochoda, author of These Women

“A many-layered, fascinating novel about the collisions that come with city living, of people devoted to old books and those determined to construct new buildings. In this swift-moving noir debut, Dwyer Murphy has conjured a fantastically vivid homage to New York.”
—Idra Novey, author of Those Who Knew

“An Honest Living is a superb debut novel by a supremely gifted writer. It’s as if Roberto Bolaño and Lawrence Osborne got together to reimagine Chinatown. I was as gripped by the mystery at the heart of this book as I was by Dwyer Murphy's perfect prose.”
—Jonathan Lee, author of The Great Mistake