Rizzoli & Isles: Listen to Me: A Novel (Hardcover) 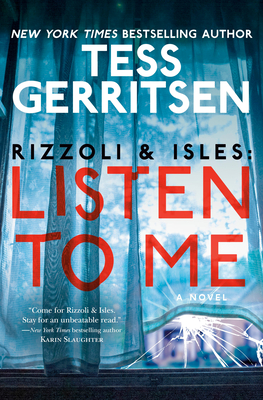 This is book number 13 in the Rizzoli & Isles series.

NATIONAL BESTSELLER • Rizzoli & Isles are back! From New York Times bestselling author Tess Gerritsen, this “shocking and fast-paced” (Karin Slaughter) thriller has Jane and Maura investigating a brutal murder with dire implications, and this time, with Jane’s intrepid mother, Angela, looking into a mystery of her own.

Mothers know best . . . But who will listen?

Boston homicide detective Jane Rizzoli and medical examiner Maura Isles are newly plagued by what seems like a completely senseless murder. Sofia Suarez, a widow and nurse who was universally liked by her neighbors, lies bludgeoned to death in her own home. But anything can happen behind closed doors, and Sofia seemed to have plenty of secrets in her last days, making covert phone calls to traceless burner phones. When Jane finally makes a connection between Sofia and the victim of a hit-and-run from months earlier, the case only grows more blurry. What exactly was Sofia involved in? One thing is clear: The killer will do anything it takes to keep their secret safe.

Meanwhile, Angela Rizzoli hasn’t had a decent night’s sleep in all the years since her daughter became a homicide detective. Maybe the apple didn’t fall too far from the tree: Nothing in Angela’s neighborhood gets by her—not the gossip about a runaway teenager down the block and definitely not the strange neighbors who have just moved in across the street. Angela’s sure there’s no such thing as coincidence in her sleepy suburb. If only Jane would listen—instead she writes off Angela’s concerns as the result of an overactive imagination. But Angela’s convinced there’s a real wolf in her vicinity, and her cries might now fall on deaf ears.

With so much happening on the Sofia case, Jane and Maura already struggle to see the forest for the trees, but will they lose sight of something sinister happening much closer to home?

Bestselling author Tess Gerritsen is also a physician, and she brings to her novels her first-hand knowledge of emergency and autopsy rooms. Her thrillers featuring homicide detective Jane Rizzoli and medical examiner Maura Isles inspired the hit TV series Rizzoli & Isles. But Gerritsen's interests span far more than medicine and crime. As an anthropology student at Stanford University, she catalogued centuries-old human remains, and she continues to travel the world, driven by her fascination with ancient cultures and bizarre natural phenomena.

“The Rizzoli and Isles books are loved by many, including me; the women’s warm, complicated friendship and superior investigative acumen remain, in their 13th outing, an utter pleasure to keep readerly company with.”—The New York Times

“Suspenseful and clever—nobody is who they seem to be in this shocking and fast-paced mystery.”—New York Times and internationally bestselling author Karin Slaughter

“I loved Listen to Me. Only the super-talented Tess Gerritsen can meld multiple storylines so successfully while she keeps the twists coming, the pages turning, and the blood spray arterial.”—Lisa Scottoline, #1 bestselling author of What Happened to the Bennetts

“Gerritsen walks that high wire between humor and suspense without ever falling off as she plays a great game of bait and switch with her readers.”—Linwood Barclay, New York Times bestselling author of Take Your Breath Away

“Outstanding . . . Listen to Me is Gerritsen at her best!”—Kathy Reichs, #1 New York Times bestselling author of the Temperance Brennan "Bones” series

“You need to Listen To Me and read Tess Gerritsen’s new thriller. It’s fiendishly well plotted. You won’t work it out until the very end—guaranteed. I enjoyed every single line!”—Lesley Kara, internationally bestselling author of The Rumor

“Engrossing . . . Gerritsen smoothly shifts between her complex plotlines as the action builds to a surprising conclusion.”—Publishers Weekly

“Gerritsen combines her knowledge of medicine and police procedure with an intricate plot, clever twists, and strong women. Solid entertainment by one of the best.”—Kirkus Reviews

“Fans who have been eagerly awaiting a new installment in the ever-popular series can breathe easy: this one is worth the wait. . . . The interplay between the two lead characters is as entertaining as always, and the writing feels effortless. . . . The latest Rizzoli and Isles novel in the long-running series will draw fans back with gusto.”—Booklist