Have I Told You This Already?: Stories I Don't Want to Forget to Remember (CD-Audio) 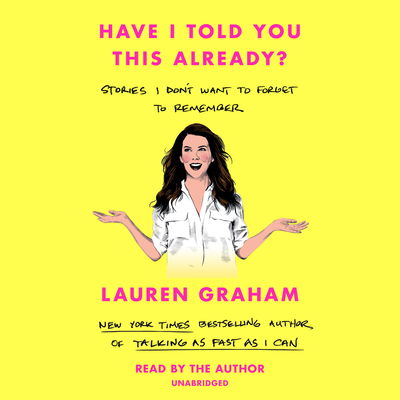 “This book is like sitting down with an old friend! Learn about an actor’s climb to the top, what book she keeps by her bedside, and what she thinks about when she walks around town. I read it as quickly as her Lorelai Gilmore character talked!”
— Margaret Walker, Union Avenue Books, Knoxville, TN

NEW YORK TIMES BESTSELLER • From the beloved star of Gilmore Girls and the New York Times bestselling author of Talking as Fast as I Can comes an “insightful, honest, funny, and moving collection of captivating stories” (BuzzFeed).

Lauren Graham has graced countless television screens with her quick-witted characters and hilarious talk show appearances, earning a reputation as a pop culture icon who always has something to say. In her latest book, Have I Told You This Already?, Graham combines her signature sense of humor with down-to-earth storytelling. Graham shares personal stories about her life and career—from her early days spent pounding the pavement while waitressing in New York City, to living on her aunt’s couch during her first Los Angeles pilot season, to thoughts on aging gracefully in Hollywood.

In “R.I.P. Barneys New York” Graham writes about an early job as a salesperson at the legendary department store (and the time she inadvertently shoplifted from it); in “Ryan Gosling Cannot Confirm,” she attempts to navigate the unspoken rules of Hollywood hierarchies; in “Boobs of the ’90s” she worries her bras haven’t kept up with the times; and in “Actor-y Factory” she recounts what a day in the life of an actor looks like (unless you’re Brad Pitt).

Lauren Graham is an actor, writer, and producer best known for her roles on the critically acclaimed series Gilmore Girls and Parenthood. She is currently an Executive Producer on Mighty Ducks: Game Changers for Disney+, in which she also stars. She is a three-time New York Times bestselling author of In Conclusion, Don’t Worry About It; Talking as Fast as I Can; and the novel Someday, Someday, Maybe. She has been a successful actor for nearly three decades, appearing in TV, film, and on Broadway. She holds a BA in English from Barnard College and an MFA in acting from Southern Methodist University. Graham lives in New York and Los Angeles.

“Lauren Graham’s fourth delicious book of musings is fast, furious, smart, and ridiculously funny. Apparently she’s not just our modern-day answer to Carole Lombard, but she has a generous dose of Dorothy Parker thrown in for good measure. It’s not particularly fair, actually. But then again, life never is.”—Amy Sherman-Palladino, creator of Gilmore Girls, Bunheads, and The Marvelous Mrs. Maisel

“As funny and warm and charming as Lauren herself.”—Jenny Han, #1 New York Times bestselling author of the To All the Boys I’ve Loved Before series and The Summer I Turned Pretty series

“With her signature humor, tenderness and warmth, Lauren Graham offers us another gem of a book in Have I Told You This Already? A read so good it feels like having a hot cup of coffee with the author herself.”—Rebecca Serle, New York Times bestselling author of One Italian Summer

“[A] lively set of personal essays . . . Graham writes with humor, authenticity, and humility. . . . [She] presents a charming and candid depiction of life as a celebrity that reminds us they are, in fact, just like us, with their own struggles, triumphs, and insecurities. . . . Fun, candid tales of Hollywood make for entertaining reading.”—Kirkus Reviews

“While best known as the quirky Lorelai Gilmore on TV’s Gilmore Girls, Graham has developed a strong second career as an author. . . . This foray into personal reflections is a charming glimpse into the life of a relatable and extremely likable actress. Graham’s down-to-earth stories are funny and touching; a surefire fourth best-seller.”—Library Journal

“Graham’s writing is fresh, sharp and very funny. Her voice invites the reader in, emanating a refreshing openness that will make them want to be her best friend.”—BookPage