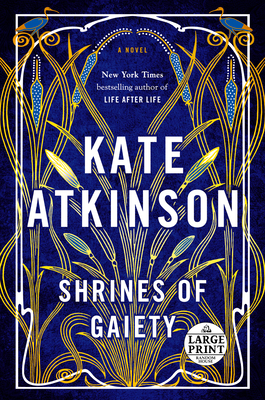 The #1 national bestselling, award-winning author of Life after Life transports us to a restless London in the wake of the Great War—a city fizzing with money, glamour, and corruption—in this spellbinding tale of seduction and betrayal.

1926, and in a country still recovering from the Great War, London has become the focus for a delirious new nightlife. In the clubs of Soho, peers of the realm rub shoulders with starlets, foreign dignitaries with gangsters, and girls sell dances for a shilling a time.

The notorious queen of this glittering world is Nellie Coker, ruthless but also ambitious to advance her six children, including the enigmatic eldest, Niven, whose character has been forged in the crucible of the Somme. But success breeds enemies, and Nellie’s empire faces threats from without and within. For beneath the dazzle of Soho’s gaiety, there is a dark underbelly, a world in which it is all too easy to become lost.

With her unique Dickensian flair, Kate Atkinson gives us a window in a vanished world. Slyly funny, brilliantly observant, and ingeniously plotted, Shrines of Gaiety showcases the myriad talents that have made Atkinson one of the most lauded writers of our time.

KATE ATKINSON won the Whitbread (now Costa) Book of the Year prize with her first novel, Behind the Scenes at the Museum. Her 2013 novel Life After Life was shortlisted for the Women's Prize for Fiction and voted Book of the Year for the independent booksellers associations on both sides of the Atlantic. It also won the Costa Novel Award, as did her subsequent novel, A God in Ruins (2015), and was adapted into a critically acclaimed television series in 2022. Her bestselling novels featuring former detective Jackson Brodie became the BBC television series Case Histories, starring Jason Isaacs. She has written twelve groundbreaking, bestselling books and lives in Edinburgh, Scotland.

"Like all of Atkinson’s novels, her latest defies easy categorization. It’s historical fiction, but there’s a sense of knowingness that feels contemporary...The adjective Dickensianfeels too clichéd to be meaningful, but Atkinson does excel at creating a big, bustling universe fully inhabited by vivid characters...Already one of the best writers working, Atkinson just gets better and better."
—Kirkus (starred review)

"[A] glittering foray into London’s post-WWI Soho...Atkinson’s incisive prose and byzantine narrative elegantly excavate the deceit, depravity, and destruction of Nellie’s world. She also turns this rich historical into a sophisticated cat-and-mouse tale as the various actors try to move in on Nellie’s turf. Atkinson is writing at the top of her game."
—Publishers Weekly (starred review)

"[A] riveting re-creation of life in 1920s London...Atkinson's palpable fondness for her characters helps her to imbue even themost minor of them with texture and depth, and she brings the same attention to detail to her portrait of the highs and lows of Jazz Age London. Another triumph from one of our finest novelists."
—Booklist (starred review)