The Warmth of Other Suns: The Epic Story of America's Great Migration (Hardcover) 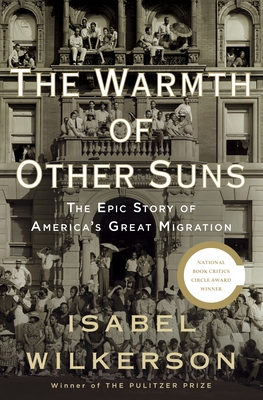 “The massive migration of black people out of the South during the 20th century is a subject that has never been truly examined in popular history. That oversight has been rectified in this magisterial work. Concentrating on three individuals, Wilkerson puts a human face on a movement that transformed American society on every level and brought the depths and heights of tragedy and triumph to those who had the courage to escape the oppression of Jim Crow.”
— Bill Cusumano, Nicola's Books, Ann Arbor, MI

“A brilliant and stirring epic . . . Ms. Wilkerson does for the Great Migration what John Steinbeck did for the Okies in his fiction masterpiece, The Grapes of Wrath; she humanizes history, giving it emotional and psychological depth.”—John Stauffer, The Wall Street Journal

NAMED ONE OF THE TEN BEST BOOKS OF THE YEAR BY The New York Times •USA Today • O: The Oprah Magazine • Publishers Weekly • Salon • Newsday •The Daily Beast

In this beautifully written masterwork, Pulitzer Prize–winning author Isabel Wilkerson chronicles one of the great untold stories of American history: the decades-long migration of black citizens who fled the South for northern and western cities, in search of a better life. From 1915 to 1970, this exodus of almost six million people changed the face of America. Wilkerson compares this epic migration to the migrations of other peoples in history. She interviewed more than a thousand people, and gained access to new data and official records, to write this definitive and vividly dramatic account of how these American journeys unfolded, altering our cities, our country, and ourselves.

With stunning historical detail, Wilkerson tells this story through the lives of three unique individuals: Ida Mae Gladney, who in 1937 left sharecropping and prejudice in Mississippi for Chicago, where she achieved quiet blue-collar success and, in old age, voted for Barack Obama when he ran for an Illinois Senate seat; sharp and quick-tempered George Starling, who in 1945 fled Florida for Harlem, where he endangered his job fighting for civil rights, saw his family fall, and finally found peace in God; and Robert Foster, who left Louisiana in 1953 to pursue a medical career, the personal physician to Ray Charles as part of a glitteringly successful medical career, which allowed him to purchase a grand home where he often threw exuberant parties.

Wilkerson brilliantly captures their first treacherous and exhausting cross-country trips by car and train and their new lives in colonies that grew into ghettos, as well as how they changed these cities with southern food, faith, and culture and improved them with discipline, drive, and hard work. Both a riveting microcosm and a major assessment, The Warmth of Other Suns is a bold, remarkable, and riveting work, a superb account of an “unrecognized immigration” within our own land. Through the breadth of its narrative, the beauty of the writing, the depth of its research, and the fullness of the people and lives portrayed herein, this book is destined to become a classic.

Isabel Wilkerson won the 1994 Pulitzer Prize for Feature Writing for her reporting as Chicago bureau chief of The New York Times. The award made her the first black woman in the history of American journalism to win a Pulitzer Prize and the first African American to win for individual reporting. She won the George Polk Award for her coverage of the Midwest and a John Simon Guggenheim Fellowship for her research into the Great Migration. She has lectured on narrative writing at the Nieman Foundation at Harvard University and has served as Ferris Professor of Journalism at Princeton University and as the James M. Cox Jr. Professor of Journalism at Emory University. She is currently Professor of Journalism and Director of Narrative Nonfiction at Boston University. During the Great Migration, her parents journeyed from Georgia and southern Virginia to Washington, D.C., where she was born and reared. This is her first book.

“A landmark piece of nonfiction . . . [Isabel Wilkerson’s] closeness with, and profound affection for, her subjects reflect her deep immersion in their stories and allow the reader to share that connection.”—Janet Maslin, The New York Times

“A brilliant and stirring epic, the first book to cover the full half-century of the Great Migration . . . Wilkerson combines impressive research . . . with great narrative and literary power. Ms. Wilkerson does for the Great Migration what John Steinbeck did for the Okies in his fiction masterpiece, The Grapes of Wrath; she humanizes history, giving it emotional and psychological depth.”—John Stauffer, The Wall Street Journal

“[A] massive and masterly account of the Great Migration . . . a narrative epic rigorous enough to impress all but the crankiest of scholars, yet so immensely readable as to land the author a future place on Oprah’s couch.”—David Oshinsky, The New York Times Book Review

“[A] deeply affecting, finely crafted and heroic book . . . This is narrative nonfiction, lyrical and tragic and fatalist. The story exposes; the story moves; the story ends. What Wilkerson urges, finally, isn’t argument at all; it’s compassion. Hush, and listen.”—Jill Lepore, The New Yorker

“Told in a voice that echoes the magic cadences of Toni Morrison or the folk wisdom of Zora Neale Hurston’s collected oral histories, Wilkerson’s book pulls not just the expanse of the migration into focus but its overall impact on politics, literature, music, sports—in the nation and the world.”—Lynell George, Los Angeles Times

“Scholarly but very readable, this book, for all its rigor, is so absorbing, it should come with a caveat: Pick it up only when you can lose yourself entirely.”—O: The Oprah Magazine

"[An] indelible and compulsively readable portrait of race, class, and politics in twentieth-century America. History is rarely distilled so finely.”—Entertainment Weekly

“Astonishing . . . Isabel Wilkerson delivers! . . . With the precision of a surgeon, Wilkerson illuminates the stories of bold, faceless African-Americans who transformed cities and industries with their hard work and determination to provide their children with better lives.”—Essence

“Profound, necessary and an absolute delight to read.”—Toni Morrison

“A sweeping and yet deeply personal tale of America’s hidden twenteith-century history. This is an epic for all Americans who want to understand the making of our modern nation.”—Tom Brokaw

“A seminal work of narrative nonfiction . . . You will never forget these people.”—Gay Talese

“This book will be long remembered, and savored.”—Jon Meacham

“A masterful narrative of the rich wisdom and deep courage of a great people. Don’t miss it!”—Cornel West