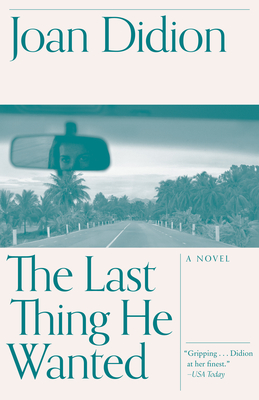 NATIONAL BESTSELLER • "Didion at her finest" —USA Today • An intricate, fast-paced novel about trying to create a context for democracy and getting hands a little dirty in the process, complete with conspiracies, arms dealing, and assassinations. From the author of The Year of Magical Thinking and Let Me Tell You What I Mean

The narrator introduces Elena McMahon, estranged from a life of celebrity fundraisers and from her powerful West Coast husband, Wynn Janklow, whom she has left, taking Catherine, her daughter, to become a reporter for The Washington Post. She finds herself boarding a plane for Florida to see her father. She becomes embroiled in her his business even though "she had trained herself since childhood not to have any interest in what he was doing." It is from this moment that she is caught up in something much larger than she could have imagined.

Didion makes connections among Dallas, Iran-Contra, and Castro, and points out how "spectral companies with high-concept names tended to interlock." As this book builds to its terrifying finish, we see the underpinnings of a dark historical underbelly.

JOAN DIDION was born in Sacramento in 1934 and graduated from the University of California, Berkeley, in 1956. After graduation, Didion moved to New York and began working for Vogue, which led to her career as a journalist and writer. Didion published her first novel, Run River, in 1963. Didion’s other novels include A Book of Common Prayer (1977), Democracy (1984), and The Last Thing He Wanted (1996).

In 2005, Didion was awarded the American Academy of Arts & Letters Gold Medal in Criticism and Belles Letters. In 2007, she was awarded the National Book Foundation’s Medal for Distinguished Contribution to American Letters. A portion of National Book Foundation citation read: "An incisive observer of American politics and culture for more than forty-five years, Didion’s distinctive blend of spare, elegant prose and fierce intelligence has earned her books a place in the canon of American literature as well as the admiration of generations of writers and journalists.” In 2013, she was awarded a National Medal of Arts and Humanities by President Barack Obama, and the PEN Center USA’s Lifetime Achievement Award.

Didion said of her writing: "I write entirely to find out what I’m thinking, what I’m looking at, what I see and what it means.” She died in December 2021.

"Simultaneously lucid and surreal ... the result is entrancing." —The New Yorker

"Remarkable.... Didion has created a menacing world where the reader is held hostage." —Los Angeles Times