The Moment: Standing Up to Bill Cosby, Speaking Up for Women (Hardcover) 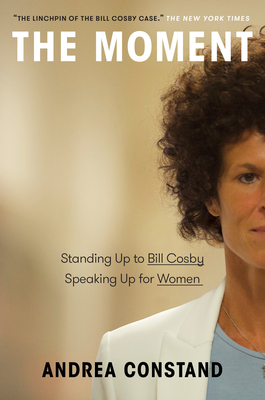 An inspiring story of resilience and bravery by the woman who became the linchpin of the case to bring Bill Cosby to justice. Andrea Constand did the right thing, not just for herself, but for more than sixty other women.

When Bill Cosby was convicted on three counts of aggravated indecent assault in 2018, the verdict sent shock waves around the globe. Some were outraged that a beloved icon of family values, the man dubbed "America's dad," had been accused, let alone convicted. Others were stunned because they had waited so long to see justice; in accusations going back decades, more than sixty women recounted how they'd been drugged, raped, and assaulted at Cosby's hands. Andrea Constand is just one of these women, but her case could still be criminally prosecuted.

Constand's legal marathon required her to endure an excruciating civil suit, and two harrowing criminal trials. It was her deep sense of personal and social responsibility, fostered by her close-knit immigrant family and values earned through team sports, that gave her the courage to testify at the criminal trial--something she agreed to do not for herself, but for the more than sixty other women whose stories would never be told in court. Ultimately, Constand's testimony brought a powerful man to account. Cosby spent nearly three years in prison before his conviction was overturned on a procedural technicality in June 2021.

In The Moment, Constand opens up about the emotional and spiritual work she did to recover from the assault and the psychological regimen she developed to strengthen herself. She also gained a new understanding of the resiliency of human spirit, and the affirming knowledge that stepping up and doing the right thing, even when the outcome is uncertain, is the surest path to true healing. From the woman who has been called "the true hero of #MeToo," The Moment is a memoir about the moment a life changes, as hers did when she was assaulted; about the moment, nearly a decade later, when she stood up for victims without a voice and put herself through an arduous criminal trial; and about the cultural moment, signified by the #MeToo movement, that made justice and accountability possible.

A portion of the author’s proceeds of The Moment will go to the Hope, Healing and Transformation foundation.  https://hopehealing.ca

ANDREA CONSTAND is a Registered Massage Therapist specializing in medical massage. The New York Times has called her "the linchpin of the Bill Cosby case," and The New York Daily News hailed her as "the true hero of #MeToo...the first female courageous enough to stand up to all the power of Hollywood and demand the impossible and win the unbelievable." She has been the Director of Operations for Temple University's women's basketball program, a sports marketing specialist for Nike, and a professional basketball player in Europe. She lives in Toronto.

Praise for Andrea Constand and The Moment

On NOW Toronto's "15 Best New Books to Read This Fall"


“The true hero of #MeToo ... the first female courageous enough to stand up to all the power of Hollywood and demand the impossible and win the unbelievable.”
The New York Daily News

“The linchpin of the Bill Cosby case.”
The New York Times

“A searing debut. . . .The depth of Constand’s wounds and the purposeful nature of her resilience shine through as road map for others. The hope here is astounding.”
—Publishers Weekly

“In this post #MeToo world, it’s easy to forget the immense challenge Andrea Constand was up against when she took on Bill Cosby, then one of the world's most beloved celebrities. She is not just a survivor, she is a warrior. The Moment is her behind-the-scenes account of an incredible victory. It’s both a riveting courtroom drama and an inspiring personal story. A must read.”
Robyn Doolittle, author of Had It Coming: What’s Fair in the Age of #MeToo? and Crazy Town: The Rob Ford Story

"Andrea Constand’s name became known because of her criminal complaint against Bill Cosby. But she will be remembered for her courage in seeking justice and accountability for herself and other sexual assault survivors. The Moment is a wrenching but ultimately hopeful book about healing and transformation. A powerful page-turning read.”
Farrah Khan, Manager, Consent Comes First, Office of Sexual Violence Support and Education, Ryerson University

“Constand’s is a story of sadness and joy, of disappointment and triumph, on every level…”
—Vanity Fair


"In the final version of her book, Constand adds a few thoughts following Cosby’s release from prison, saying 'happiness is all that matters,' and vowing 'to support sexual assault victims and to help other voices be heard.' Because of the prominence she gained during the Cosby trials, it’s conceivable that people will listen.


In the end that might be a victory greater than anything possible in a courtroom."—The Washington Post