Horn Barbecue: Recipes and Techniques from a Master of the Art of BBQ (Hardcover) 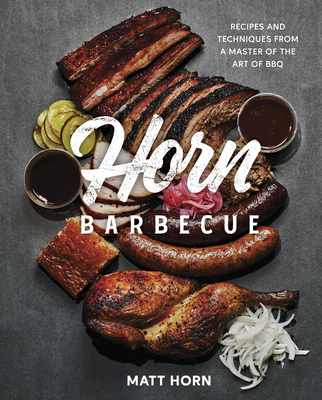 “Horn Barbecue is a master class in how to make mouthwatering barbecue. A history-making cookbook.” —Sunset Magazine

Not only will you learn how to make classics of Texas- and Carolina-style BBQ, like brisket and pulled pork, you will expand your BBQ repertoire to include “West Coast Barbecue,” the signature style that has made Horn famous, with recipes like Smoked Tri-Tip, Burn Barrel Chicken, and Jalapeno Cheddar Links.

Rookies who just bought their first backyard smoker (or who want to smoke on a standard grill) as well as seasoned BBQ veterans will find a whole world of new ideas in this authoritative guide to cooking low and slow over smoky, smoldering woods.

Following a thorough introduction to smoking, including types of smokers, how to turn your existing grill into a smoker, barbecue tools, best meat cuts for smoking, and answers to the most common questions about smoking, you’ll learn how to make crave-worthy things like:

Horn, one of Food & Wine’s ten “Best New Chefs” for 2021, is the most exciting new talent in American barbecue in years. His Horn Barbecue restaurant in Oakland, California, recently awarded a rare “Michelin Bib Gourmand” designation, has lines outside that run for blocks and hundreds of rave reviews in the media. The draw? Cooked-to-perfection meats rubbed, mopped, basted, and sauced the way good BBQ should be, plus comforting sides and fixins’ and inspired desserts and drinks. Now the restaurant’s secret recipes, and many more from Matt’s own personal repertoire, are revealed in the pages of this exciting, user-friendly, and beautifully photographed book.

So what sets this cookbook apart from the rest? Matt’s original barbecue style. Other barbecue cookbooks focus on one regional tradition, such as Texas or the Carolinas. Matt draws on both of those traditions—and recipes from them appear liberally in this book—but he draws on other traditions as well and adds his own California-style spin to the mix, by working in lots of veggies and fruits and by featuring things like poultry and seafood, which are non-traditional BBQ proteins.

Matt also tells his own inspiring story of how he learned to make BBQ and open a restaurant, and about how his journey echoes and continues the glorious lineage of Black barbecue in the US—an amazing yet often unknown history.

Matt Horn is a rising star in barbecue and, as one of Food and Wine's ten "Best New Chefs for 2021," in the US restaurant scene generally. Matt grew up in the agricultural breadbasket of North America, California’s Central Valley, where he built his own smokers from discarded oil barrels and abandoned propane tanks. His barbecue education included extended stays with his grandparents in Oklahoma, where he picked up their secret BBQ recipes and learned the basics of the German-inflected Texas-style BBQ that prevails in that state. As his interest in barbecue grew, he studied with the Texas legend Robert Patillo, of Patillo’s BBQ in Beaumont, but he remains to this day largely self-taught. About eight years ago, Matt started doing pop-up restaurants just about anywhere that would have him, from breweries to wineries to churches and farmer’s markets, and he became a San Francisco Bay Area legend as a result. In September 2020 he opened his first restaurant, Horn Barbecue, in Oakland, which has been getting rave reviews in both local and national media and where lines to get in regularly stretch for a block or longer; the restaurant recently landed a coveted "Michelin Guide Restaurant" designation and is a 2022 James Beard Foundation "Best New Restaurant in the US" finalist. Matt is beloved in the Bay Area and is the founder of the Horn Initiative, a nonprofit dedicated to food equity and social justice, which daily feeds people in need free lunches of barbecued brisket and other dishes. He lives with his family in the Oakland area.

"Matt Horn’s new cookbook, Horn Barbecue, is a master class in how to make mouthwatering barbecue.... A history-making cookbook."—Sunset Magazine

“From charred lows to perfectly rendered highs, Pitmaster Matt Horn tells the tale of his “West Coast Barbecue.” This book has all the heart and soul of his journey and the recipes that make Horn Barbecue one of the most exciting barbecue joints in the country.”
—Aaron Franklin, Franklin Barbecue, Austin, and author of Franklin Barbecue

“We can all learn something from Matt Horn. In this book you will find recipes from one of our country’s great chefs and inspiration from a man who is picking up the American barbecue legacy and propelling it forward.”
—David Chang, chef, founder of Momofuku group, cookbook author, and host of “Ugly Delicious”

“I can’t begin to tell you how proud I am to know Matt Horn! Matt is the future of BBQ! The “Barbecue My Way” section that opens this book is a must-read for understanding Matt’s talent, dedication, and determination to be successful! In the rest of the book you will learn how to become an amazing pitmaster yourself, with techniques and recipes that will blow your mind! The great Matt Horn is a gentleman, father, husband, and businessman. This is a must-have book.”
—Rodney Scott, Rodney Scott’s Whole Hog BBQ, Charleston, and author of Rodney Scott’s World of BBQ

“Horn Barbecue inspires. After you read this beautifully photographed and accessible book, you’ll see why Matt Horn is a rising star in the society of culinary artists who sublimely smoke meat. An important book.”
—From the Foreword by Adrian Miller, author of Black Smoke