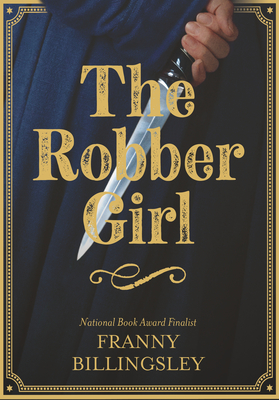 A brilliant puzzle of a book from the author of Chime and The Folk Keeper plunges us into the vulnerable psyche of one of the most memorable unreliable narrators to grace the page in decades. The Robber Girl has a good dagger. Its voice in her head is as sharp as its two edges that taper down to a point. Today, the Robber Girl and her dagger will ride with Gentleman Jack into the Indigo Heart to claim the gold that’s rightfully his. But instead of gold, the Robber Girl finds a dollhouse cottage with doorknobs the size of apple seeds. She finds two dolls who give her three tasks, even though she knows that three is too many tasks. The right number of tasks is two, like Grandmother gave to Gentleman Jack: Fetch unto me the mountain’s gold, to build our city fair. Fetch unto me the wingless bird, and I shall make you my heir. The Robber Girl finds what might be a home, but to fight is easier than to trust when you’re a mystery even to yourself and you’re torn between loyalty and love. The Robber Girl is at once achingly real—wise to the nuances of trauma—and loaded with magic, action, and intrigue. Every sentence shines, sharp as a blade, in a beautifully crafted novel about memory, identity, and the power of language to heal and reconstruct our lives.

In a setting just slightly sideways from the 19th-century American frontier, it’s never entirely clear what’s the imagination of an almost-feral robber girl and what’s the workings of a world where allegory and reality intertwine. . . . Gorgeously written, with ferocious emotion in the caesuras of a sparse, unreliable narrative.
—Kirkus Reviews (starred review)

Glitters with the intelligent intricacy of its plot, language, and themes, all of which are intimately joined, refracted, and intensified through Billingsley’s imagery. . . Bringing together elements of magic, religion, and the Wild West frontier, Billingsley’s story allows Starling, hidden even from her own self, to speak her perceptions, the lucidity of her inner life, with startling, poetic force.
—The Horn Book (starred review)

Billingsley creates a fantastical world with rich metaphors and intricate descriptions that evoke and blend all of the senses, wielding language as a metaphor as well as a means to advance the plot. The contrast between the two communities and two life choices are evident in the fully-developed, complex characters. . . . Elements of fantasy, adventure, mystery, and personal identity are expertly interwoven, threaded with symbolism and foreshadowing, and crafted into a compelling tale that begs to be reread for its rich detail.
—School Library Connection (starred review)

Billingsley (The Folk Keeper, BCCB 10/99, Chime, BCCB 2/11) crafts Starling with an intense, lyrical interiority; our heroine’s perspective is both focused and transparent, allowing readers to make their own judgments about what she really owes Gentleman Jack and what it means to be wild, to be tame, and to have a family. It’s a hefty, subtle book, part fantasy Western, part psychological mystery, beautifully textured with fine-grained sensory and emotional detail and alive with dancing prose that would pair well with Andrews’ Spindlefish and Stars (BCCB 9/20).
—The Bulletin of the Center for Children's Books

This dazzling, heart-rending puzzle of a tale, narrated by a young girl of the truth as she knows it, is set against a fantastic Wild West backdrop brilliantly imagined by Franny Billingsley… Billingsley is a brilliant writer.
—The Buffalo News