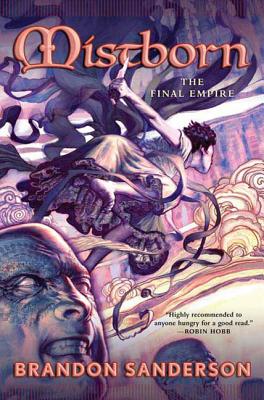 This is book number 1 in the The Mistborn Saga series.

Kelsier recruited the underworld's elite, the smartest and most trustworthy allomancers, each of whom shares one of his many powers, and all of whom relish a high-stakes challenge. Only then does he reveal his ultimate dream, not just the greatest heist in history, but the downfall of the divine despot.

But even with the best criminal crew ever assembled, Kel's plan looks more like the ultimate long shot, until luck brings a ragged girl named Vin into his life. Like him, she's a half-Skaa orphan, but she's lived a much harsher life. Vin has learned to expect betrayal from everyone she meets, and gotten it. She will have to learn to trust, if Kel is to help her master powers of which she never dreamed.

This saga dares to ask a simple question: What if the hero of prophecy fails?

“Elantris is the finest novel of fantasy to be written in many years. Brandon Sanderson has created a truly original world of magic and intrigue, and with the rigor of the best science fiction writers he has made it real at every level.” —Orson Scott Card

“Elantris . . . is marked by vivid and strongly drawn characters (including a memorable female character) and ingenious plot twists that will keep the reader turning pages. Don't miss it!” —Katherine Kurtz, New York Times-bestselling author of the Deryni series

“Sanderson's outstanding fantasy debut . . offers something for everyone: mystery, magic, romance, political wrangling, religious conflict, fights for equality, sharp writing and wonderful, robust characters. . . . The intrigue and excitement grow steadily in this smoothly written, perfectly balanced narrative; by the end readers won't want to put it down. . . . Sanderson is a writer to watch.” —Publishers Weekly, Starred Review on Elantris

“In this stunning debut novel [is] a completely unique world that enfolds the reader in mystery and wonder right through till the last page.” —Romantic Times Bookclub on Elantris