The Alloy of Law: A Mistborn Novel (The Mistborn Saga #4) (Mass Market) 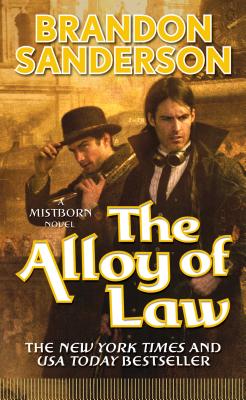 This is book number 4 in the The Mistborn Saga series.

Kelsier, Vin, Elend, Sazed, Spook, and the rest are now part of history—or religion. Yet even as science and technology are reaching new heights, the old magics of Allomancy and Feruchemy continue to play a role in this reborn world. Out in the frontier lands known as the Roughs, they are crucial tools for the brave men and women attempting to establish order and justice.

One such is Waxillium Ladrian, a rare Twinborn, who can Push on metals with his Allomancy and use Feruchemy to become lighter or heavier at will. After twenty years in the Roughs, Wax has been forced by family tragedy to return to the metropolis of Elendel. Now he must reluctantly put away his guns and assume the duties and dignity incumbent upon the head of a noble house. Or so he thinks, until he learns the hard way that the mansions and elegant tree-lined streets of the city can be even more dangerous than the dusty plains of the Roughs.

“Sanderson continues to show that he is one of the best authors in the genre.” —Library Journal, starred review

“Rive with laugh-out-loud moments, religious and philosophical ponderings, and plenty of crime-fighting action, this book fits nicely in any gun-holster.” —Booklist on The Alloy of Law

“An engaging and fun romp of a read. The characters really shine.” —RT Book Reviews on The Alloy of Law

“Sanderson's fresh ideas on the source and employment of magic are both arresting and original.” —Kirkus Reviews on The Alloy of Law

“Mistborn utilizes a well thought-out system of magic. It also has a great cast of believable characters, a plausible world, an intriguing political system and, despite being the first book of a trilogy, a very satisfying ending. Highly recommended to anyone hungry for a good read.” —Robin Hobb

“ It's rare for a fiction writer to have much understanding of how leadership works and how love really takes root in the human heart. Sanderson is astonishingly wise.” —Orson Scott Card