Be a King: Dr. Martin Luther King Jr.’s Dream and You (Hardcover) 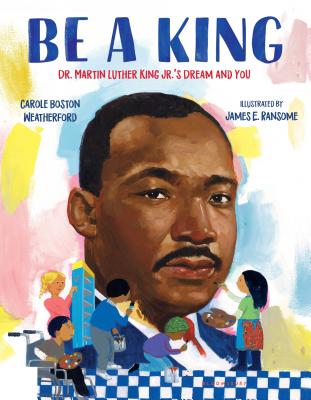 You can be a King. Stamp out hatred. Put your foot down and walk tall.

You can be a King. Beat the drum for justice. March to your own conscience.

Featuring a dual narrative of the key moments of Dr. King's life alongside a modern class as the students learn about him, Carole Weatherford's poetic text encapsulates the moments that readers today can reenact in their own lives. See a class of young students as they begin a school project inspired by Dr. Martin Luther King Jr. and learn to follow his example, as he dealt with adversity and never lost hope that a future of equality and justice would soon be a reality. As times change, Dr. King's example remains, encouraging a new generation of children to take charge and change the world . . . to be a King.

Carole Boston Weatherford is the award-winning author of more than 50 books of poetry, nonfiction, and children's literature. She is the recipient of a Newbery Honor, Coretta Scott King Author Honor, two NAACP Image Awards, a WNDB Walter Award, and numerous other accolades. Her books include I, Matthew Henson; Jesse Owens: Fastest Man Alive; and Be a King. She resides in North Carolina where she teaches at Fayetteville State University.
cbweatherford.com

James Ransome is the illustrator of more than forty books and the winner of numerous awards. His work is part of both public and private children's book art collections. He teaches at Syracuse University and lives in Rhinebeck, NY, with his wife, writer Lesa Cline Ransome, and their children.

"While the book is accessible as an inspiring primer on social justice and taking action, it also challenges more sophisticated readers to make connections between the art, the text, Dr. King’s life, the civil rights movement at large, and the continuing struggle to affect change. . . .This book is sure to spark discussion and empower readers of all ages." - Starred review, School Library Journal

"Thoughtful paintings of moving scenes are paired with brief, motivational reflections that evoke all the sentiment and fervor of the American civil rights movement." - Foreword Review

"The historical scenes, painted in Ransome’s signature thick, saturated style, are infused with a powerful sense of narrative." - Publishers Weekly

"The use of rich, realistic paintings with pencil detailing for King’s life contrasts with the brighter, simpler drawings for the contemporary children, giving a physical reminder that his work is ongoing." - School Library Connection

"Told in the first person from Hamer’s own perspective, this lyrical text in verse emphasizes the activist’s perseverance and courage, as she let her booming voice be heard." - starred review, School Library Journal on VOICE OF FREEDOM: FRANNIE LOU HAMER

"Caldecott Honor winner Weatherford has rendered Hamer’s voice so precisely that it is like sitting at her knee as she tells her story." - starred review, Bookist on VOICE OF FREEDOM: FRANNIE LOU HAMER

"Visceral, intimate and plainly told, this story is sure to move young children." - The New York Times Book Review on WORDS SET ME FREE