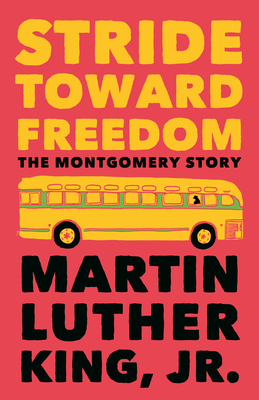 This is book number 1 in the King Legacy series.

A young Dr. King wrote Stride Toward Freedom just 2 years after the successful completion of the boycott. In his memoir about the event, he tells the stories that informed his radical political thinking before, during, and after the boycott—from first witnessing economic injustice as a teenager and watching his parents experience discrimination to his decision to begin working with the NAACP. Throughout, he demonstrates how activism and leadership can come from any experience at any age.

Comprehensive and intimate, Stride Toward Freedom emphasizes the collective nature of the movement and includes King’s experiences learning from other activists working on the boycott, including Mrs. Rosa Parks and Claudette Colvin. It traces the phenomenal journey of a community and shows how the 28-year-old Dr. King, with his conviction for equality and nonviolence, helped transform the nation and the world.

Dr. Martin Luther King, Jr. (1929-1968), Nobel Peace Prize laureate and architect of the nonviolent civil rights movement, was among the twentieth century's most influential figures. One of the greatest orators in U.S. history, King is the author of several books, including Stride Toward Freedom: The Montgomery Story, The Trumpet of Conscience, Why We Can't Wait, and Where Do We Go from Here: Chaos or Community? His speeches, sermons, and writings are inspirational and timeless. King was assassinated in Memphis, Tennessee, on April 4, 1968.

Clayborne Carson is professor of history at Stanford University, the founding director of the Martin Luther King, Jr., Research and Education Institute, and director of the King Papers Project. The author and editor of numerous books, he is general editorial advisor to The King Legacy and lives in Palo Alto, California.

Martin Luther King's early words return to us today with enormous power, as profoundly true, as wise and inspiring, now as when he wrote them fifty years ago.—Howard Zinn