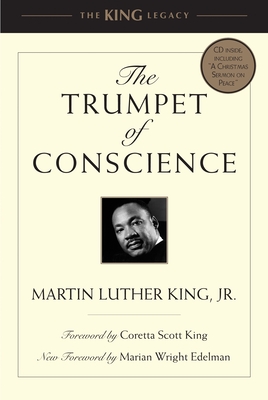 This is book number 3 in the King Legacy series.

In November and December 1967, Dr. Martin Luther King, Jr., delivered five lectures for the renowned Massey Lecture Series of the Canadian Broadcasting Corporation. The collection was immediately released as a book under the title Conscience for Change, but after King’s assassination in 1968, it was republished as The Trumpet of Conscience. The collection sums up his lasting creed and is his final testament on racism, poverty, and war.

Each oration in this volume encompasses a distinct theme and speaks prophetically to today’s perils, addressing issues of equality, conscience and war, the mobilization of young people, and nonviolence. Collectively, they reveal some of King’s most introspective reflections and final impressions of the movement while illustrating how he never lost sight of our shared goals for justice. The book concludes with “A Christmas Sermon on Peace”—a powerful lecture that was broadcast live from Ebenezer Baptist Church on Christmas Eve in 1967. In it King articulates his long-term vision of nonviolence as a path to world peace.

Dr. Martin Luther King, Jr. (1929–1968), Nobel Peace Prize laureate and architect of the nonviolent civil rights movement, was among the twentieth century’s most influential figures. One of the greatest orators in U.S. history, King also authored several books, including Stride Toward Freedom: The Montgomery Story, Where Do We Go from Here: Chaos or Community?, and Why We Can’t Wait. His speeches, sermons, and writings are inspirational and timeless. King was assassinated in Memphis, Tennessee, on April 4, 1968.

Coretta Scott King (1927–2006), the wife of Martin Luther King, Jr., was an author and a human rights activist. She helped lead the civil rights movement after King’s assassination, carrying the message of nonviolence and the dream of a beloved community to many countries and spearheading civil rights coalitions and foundations.

Distinguished author and civil rights lawyer Marian Wright Edelman has been a lifelong advocate for disadvantaged Americans and is the president of the Children’s Defense Fund.