Where Do We Go from Here: Chaos or Community? (King Legacy #2) (Hardcover) 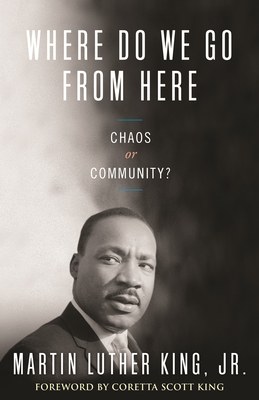 This is book number 2 in the King Legacy series.

In 1967, Dr. Martin Luther King, Jr., isolated himself from the demands of the civil rights movement, rented a house in Jamaica with no telephone, and labored over his final manuscript. In this significantly prophetic work, which has been unavailable for more than ten years, we find King's acute analysis of American race relations and the state of the movement after a decade of civil rights efforts. Here he lays out his thoughts, plans, and dreams for America's future, including the need for better jobs, higher wages, decent housing, and quality education. With a universal message of hope that continues to resonate, King demanded an end to global suffering, powerfully asserting that humankind-for the first time-has the resources and technology to eradicate poverty.

Dr. Martin Luther King, Jr. (1929–1968), Nobel Peace Prize laureate and architect of the nonviolent civil rights movement, was among the twentieth century’s most influential figures. One of the greatest orators in US history, King also authored several books, including Stride Toward Freedom: The Montgomery Story, Where Do We Go from Here: Chaos or Community?, and Why We Can’t Wait. His speeches, sermons, and writings are inspirational and timeless. King was assassinated in Memphis, Tennessee, on April 4, 1968.

Martin Luther King, Jr., was one of the greatest organic intellectuals in American history. His unique ability to connect the life of the mind to the struggle for freedom is legendary, and in this book-his last grand expression of his vision-he put forward his most prophetic challenge to powers that be and his most progressive program for the wretched of the earth.—Cornel West, professor of religion and African American studies, Princeton University, and author of Race Matters