The Behavioral Code: The Hidden Ways the Law Makes Us Better … or Worse (Paperback) 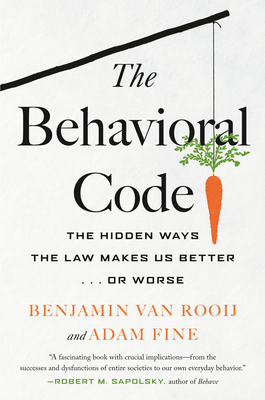 Why do most Americans wear seatbelts but continue to speed even though speeding fines are higher? Why could park rangers reduce theft by removing “no stealing” signs? Why was a man who stole three golf clubs sentenced to 25 years in prison?

Some laws radically change behavior whereas others are consistently ignored and routinely broken. And yet we keep relying on harsh punishment against crime despite its continued failure.

Professors Benjamin van Rooij and Adam Fine draw on decades of research to uncover the behavioral code: the root causes and hidden forces that drive human behavior and our responses to society’s laws. In doing so, they present the first accessible analysis of behavioral jurisprudence, which will fundamentally alter how we understand the connection between law and human behavior.

The Behavioral Code offers a necessary and different approach to battling crime and injustice that is based in understanding the science of human misconduct—rather than relying on our instinctual drive to punish as a way to shape behavior. The book reveals the behavioral code’s hidden role through illustrative examples like:

Revelatory and counterintuitive, The Behavioral Code catalyzes the conversation about how the law can effectively improve human conduct and respond to some of our most pressing issues today, from police misconduct to corporate malfeasance.

Benjamin van Rooij, PhD, is a professor in law and society and the director of research at the School of Law at the University of Amsterdam and the Global Professor of Law at the University of California, Irvine. Findings from his two decades of academic work have been featured in the New York Times, The Hill, NPR, and Huffington Post. His research on law and behavior was awarded a highly competitive and prestigious 2-million-Euro grant by the European Research Council.

Adam Fine, PhD, is an assistant professor of criminology and criminal justice and of law and behavioral sciences at Arizona State University. His award-winning work has been funded by the US Department of Justice and a Visionary Grant from the American Psychological Foundation. His 40-plus publications have routinely appeared in the top journals in psychology and law, developmental psychology, public policy, criminology, and criminal justice.