To Myself a Stranger: A Biography of Rose Hawthorne Lathrop (Paperback) 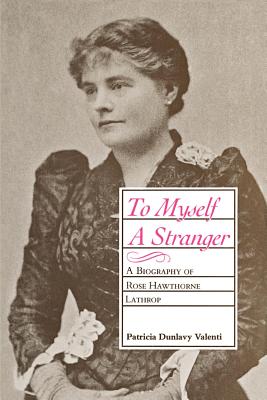 By Patricia Dunlavy Valenti
$19.95
Temporarily Out Of Stock - Can Be Ordered For You, Takes Extra Time.
(This book cannot be returned.)

When she was forty-four years old, Rose Hawthorne Lathrop left her comfortable home in New London, Connecticut, and soon thereafter took an apartment on Manhattan's Lower East Side. She ran a newspaper ad inviting indigents dying of cancer to come live with her to be cared for until their death. The journey that led this daughter of one of America's most prominent literary figures to that Lower East Side tenement is the subject of this fascinating and far-reaching biography by Patricia Dunlavy Valenti.

Rose was born in 1851, the youngest child of Nathaniel and Sophia Hawthorne. As an adult, she reflected upon a childhood that made me seem to myself a stranger who had come too late. Indeed, throughout much of her life, Rose found her own sense of identity subsumed by the demands and needs of those closest to her. She was overshadowed not only by her famous father but also by her brother, Julian, who achieved a modest degree of literary fame in his own right, and by her sister, Una, whose fragile health was a constant source of concern to her family. In 1871, Rose married George Parsons Lathrop, who would become a writer and an editor of her father's works. Rose herself had begun to write fiction and poetry at an early age, and after the death of their only child in 1881, she saw the publication of much of her work. Valenti reads these stories and poems with a biographer's eye and finds them filled with clues pointing to the remarkable transformation that would allow their author to transcend Victorian constraints and claim the kind of life that would realize her singular gifts. Particularly illuminating are the works Rose completed during the years in which she was making a break from her husband, whom she left in 1896. After her final separation from her husband, Rose, who had converted to Roman Catholicism in 1891, devoted the remainder of her life to the work carried on to this day by the order of nuns she founded, the Servants of Relief for Incurable Cancer. The account of her ministry, begun when cancer was thought contagious, should establish Rose Hawthorne Lathrop as a visionary in her belief that everyone has a right to die with dignity and as a pioneer in her advocacy of compassionate methods of caring for those near death. Valenti's well-written and thoroughly researched biography will interest a wide audience, from those who would enjoy a lively glimpse of the Hawthorne household to those concerned with the documenting of women's contributions to society.

Patricia Dunlavy Valenti is professor emerita of English at the University of North Carolina at Pembroke.