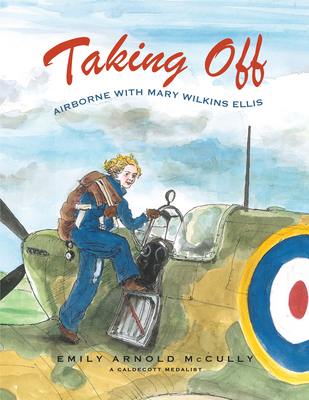 Witness the true story of how Mary Wilkins Ellis’ childhood passion for flying led to an exciting career in the air, written and illustrated by a Caldecott Medalist.


As a child, Mary Wilkins Ellis longed to fly, but she had to wait until she was 16 before she could have her first lesson. She soon became the youngest licensed pilot in her English county, but then all civilian flight was banned when Germany launched its attacks on Britain in 1940. Mary was grounded.

One day she chanced to hear a radio appeal for Britons with pilot’s licenses—even women—to join the Air Transport Auxiliary and ferry brand new fighter planes to Royal Air Force bases. Mary immediately applied, and spent the rest of the war delivering hundreds of different kinds of aircraft—most of which she’d never flown before—forming lifelong bonds with her colleagues, surviving many a close call, and helping to save her country from destruction.

After the war she became a flight instructor, ran an air taxi service, then managed an airfield, the only woman in Europe to do so. In her spare time, she won rallies in her racing car.  Mary’s childhood dream became a thrilling lifetime aloft, lasting until she died at 101.

With watercolor and ink illustrations which perfectly capture the exhilaration of flying, Taking Off brings this little-known figure and her can-do spirit to life.

Extensive material in the back of the book includes additional information about Mary Wilkins Ellis and the Airport Transport Auxiliary, as well as sources.

Emily Arnold McCully has illustrated many books for children including Mirette on the High Wire which received a Caldecott Medal, Dreaming in Code: Ada Byron Lovelace, Computer Pioneer, which received starred reviews in Booklist and Kirkus Reviews, and Kate’s Light by Elizabeth Spires. She lives in Austerlitz, New York. You can visit her at emilyarnoldmccully.com.

"This handsome picture-book biography introduces a courageous woman who followed her dream."—Booklist

"McCully’s ink line and watercolor artwork sports an airy translucence that invites viewers to project themselves into the skies. . . ."—The Bulletin of the Center for Children's Books

"The personality and details of Mary Wilkins Ellis’s story fly off the page."—School Library Journal