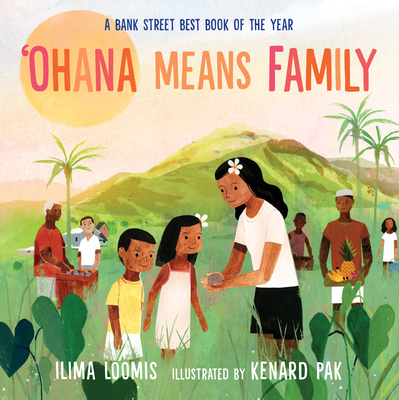 Join the family, or ohana, as they farm taro for poi to prepare for a traditional luau celebration with a poetic text in the style of The House That Jack Built. Now available in paperback.

"This is the land that's never been sold, where work the hands, so wise and old, that reach through the water, clear and cold, into the mud to pick the taro to make the poi for our ohana's luau."

The backmatter includes a glossary of Hawaiian terms used, as well as an author's note.

Ilima Loomis is an award-winning author and journalist who's contributed to publications including Science, Science News for Students, and National Geographic Traveler. She is based on Maui, Hawaii.

Kenard Pak has illustrated several picture books, most recently, The Fog by Kyo Maclear and Goodbye Autumn, Hello Winter which Pak both wrote and illustrated. He has worked as an artist on many films with Dreamworks, Walt Disney Feature Animation and Laika. Pak lives and works in San Francisco, California.

★ "The importance of this native Hawaiian tradition is revealed through Loomis’ and Pak’s textual and visual re-creations. The wind, the rain, the sun, the 'land that has never been sold,' and the wise old hands that work the land show that family is one of many interconnected parts—plant, planet, human, the elements—each as important as the other. Pak’s lovely, stylized watercolors bring readers close enough to see droplets on the roots of the kalo and then zoom out to see the whole sun-kissed island. Loomis writes in a gentle rhyme that undulates like the elements she describes so that readers will soon be murmuring along in sync. . . . this book does an admirable job of honoring the culture without cliché."—Booklist, Starred Review

★  "In this read-aloud, Loomis writes a beautiful homage to kalo, a cornerstone of the culture and livelihood of the Hawaiian people. The poetic text combines with Pak's breathtaking illustrations to depict kalo's embodiment of the strong connection between land, water, air, sun, and the people. With his layered, textured paintings, Pak creates both beautiful pictures of the kalo and stunning panoramas of the community. A note on kalo and poi, an author's note, and a glossary are provided to explain the importance of the elements of this story. An incredible book to share with every member of your ‘ohana."—Kirkus Reviews, Starred Review


"This 'The House That Jack Built'–style poem explores the importance of poi, the Hawaiian staple that, an author’s note reports, 'no celebratory lu¯’au is complete without.' . . .  The creators present this traditional practice—cultivating, harvesting, preparing, and eating a treasured food together—through the lens of Hawaiian culture."—Publishers Weekly