Ode to a Nobody (Hardcover) 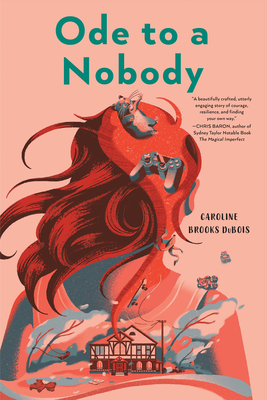 A devastating tornado tears apart more than just houses in this striking novel in verse about a girl rebuilding herself.

Before the storm, thirteen-year-old Quinn was happy flying under the radar. She was average. Unremarkable. Always looking for an escape from her house, where her bickering parents fawned over her genius big brother.

Inside our broken home / we didn’t know how broken / the world outside was.

But after the storm, Quinn can’t seem to go back to average. Her friends weren't affected by the tornado in the same way. To them, the storm left behind a playground of abandoned houses and distracted adults. As Quinn struggles to find stability in the tornado’s aftermath, she must choose: between homes, friendships, and versions of herself.

Nothing that was mine / yesterday is mine today.

Told in rich, spectacular verse, Caroline Brooks DuBois crafts a powerful story of redemption as Quinn makes her way from Before to After. There’s nothing average about the world Quinn wakes up to after the storm; maybe there’s nothing average about her, either. This emotional coming-of-age journey for middle grade readers proves that it’s never too late to be the person you want to be.

Caroline Brooks DuBois is the author of The Places We Sleep, which received a starred review from School Library Journal and was an Indies Introduce and Kids Indie Next selection. After teaching English at the middle school, high school, and college level, she was named a Nashville Blue Ribbon Teacher. Caroline lives in Nashville, Tennessee with her family. Visit her online at carolineduboiswrites.com.

★  "A book in verse that vibrates with the emotional transition of a teenager into a confident poet that should find its way to many library shelves."—School Library Journal, Starred Review

"DuBois moves back and forth between adolescent angst in a conversational voice and insightful reflection full of metaphor and personification in this thought-provoking novel."—The Horn Book

"Quinn’s personal growth will keep readers by her side as she finds her way to a brighter future."—Booklist

"In another beautiful verse novel, Caroline Brooks DuBois gives us a poignant story about thinking you’re nobody and discovering you’re somebody. A testament to resilience, self-discovery, and the transformative power of poetry." —Megan E. Freeman, Pushcart Prize–nominated author of Alone